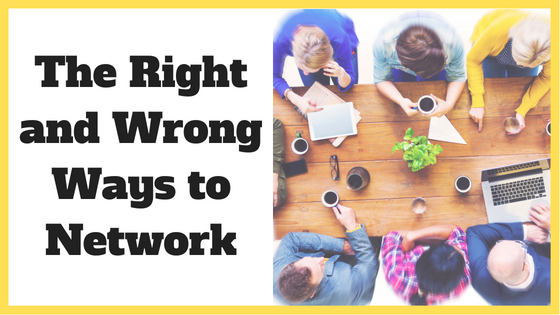 The Right and Wrong Ways to Network

Networking is one of the most useful tools for personal and professional development. Many people fear networking, especially if they haven’t done it before. However, the benefits of networking can be huge.

Networking is great for making crucial contacts that can help you land your dream job or to develop and complete a new and exciting project. So, how do you network effectively? And what are the wrong way to network?

Here we break down some of the wrong ways to network and share some insight into how to get the most out of your networking efforts.

Mistake #1: Only doing it when you’re job seeking

Effective networking can be difficult, which is why so many people get it so wrong. One big mistake that people make is by only networking when they need a job. If you’re waiting until you’re struggling without any work then you will be let down with the results.

Whether you’re a budding entrepreneur, an office worker or , networking can be an extremely effective tool in growing professionally and climbing the career ladder. Schedule time for networking into your diary around once a month for optimal success.

Make sure to invest time and effort to keep in touch with old colleagues or clients, as well as new people you meet at networking events and social gatherings.

Another grave mistake which people make when networking is by not using social networking sites. The likes of Twitter, Instagram and Facebook can be a great way to expand your network and meet new people who you wouldn’t have met otherwise.

If you don’t have a LinkedIn profile set up, you definitely want to create one ASAP. Considering that over 500 million professionals use this platform and it currently contains more than three million active job postings, it’s kind of a no-brainer.

Mistake #3: Not following up

Never following up is a big no-no in networking. What is the point in making an effort to build a new network if you never follow up with your new contacts? It is very easy for people to forget you, so make sure to follow up and stay in touch via phone or email to build a relationship.

Mistake #4: Not knowing the basics

If you don’t know enough about the person you’re meeting that raises many concerns. Potential connections could think you’re using them or could easily be turned off if you don’t know simple things like the name of the company they work for. It might be worth looking at their LinkedIn profile or do a little bit of background research about them and the company they work for, so you have questions ready to ask.

If you want to learn how to network in the right way, it’s important to approach potential contacts confidently without being too in-your-face. If you are at a networking event, casually approach the individual and engage in some small talk first. This will put you both at ease and will establish a connection straight away. Start off by introducing yourself and asking how they are. Perhaps ask a couple of questions about what they do before stating what you can offer to their company.

If you are connecting with them online, it is a good idea to establish some common ground by sending them a personal message explaining why you would like to connect.

Mistake #6: Not watching out for the cues

To be successful whilst networking, you need to be able to understand when to move on. Contrary to what you think, not everyone wants to listen or is interested in your job or the services or products you provide.

If you see signs of disinterest, such as not saying much back, rolling eyes or looking like they would rather be elsewhere then that’s your cue to move on and start chatting to someone else. The roles may be reversed where you could be engaging with someone who you have no interest in networking with, so it’s vital to have a polite exit plan.

If someone is telling you their whole life story and you don’t have much time and want to engage with as many contacts as possible then it would be a good idea to politely disengage. You could have a backup line such as “It’s been lovely talking to you, but I’m here to talk to (insert name) about a potential job offer.”

Remember to be polite, friendly and do your research and networking will be a success.

Thinking of hiring a career coach to help you brush up on your networking skills and land your dream job? Browse our directory of career coaches and get a FREE consultation or request a personalized coach recommendation!

About the Author Lauren Buck

Lauren Buck is a Criminology and Psychology graduate, freelance writer, blogger and Etsy store owner. She writes about a variety of topics including student and career advice for Inspiring Interns, which specialises in placing graduates in the best London roles.