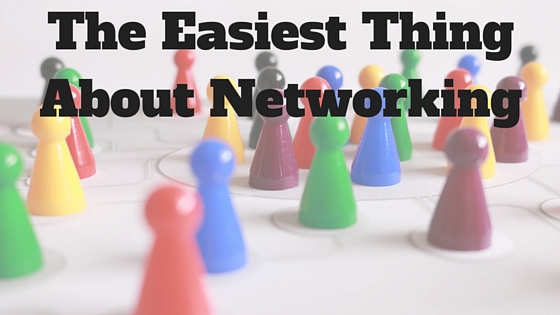 The Easiest Thing About Networking

For some of us, the thought of going to a networking event conjures up images of a blind date gone bad. Maybe you’re uncomfortable at the notion of going someplace where you won’t know anyone, and maybe you’re scared to death of what may (or may not) happen. When you go to a networking event, what do you say? What do you do? Does the thought of it bring on not so pleasant memories or feelings of dread or fright? Maybe for you it’s not that severe. However, it is for some.

Maybe you just don’t see the point in going in the first place. More times than not, there can be a stigma you’ve attached to networking that makes it an unsavory event. If this describes you or someone you know, I have good news for you. Networking is actually one of the greatest tools ever!

When you were growing up did you ever sell anything for a school project (wrapping paper, fruit, magazines, etc.)? Networking!

Asking friends if they know that guy or girl in Mr. Franklin’s English class? Networking!

You get the picture.

Whether you are the initiator or on the receiving end, you play just as much of a pivotal role as everyone else in the conversation. You’d be surprised at how many people you know personally and professionally. All of these people are a part of your network. Never underestimate the power of your networking ability.

You’d be surprised at how small the world really is. The answer to those questions aren’t that hard to come by. There are usually 2 to 3 degrees of separation between you and whoever you (or someone you know) is looking to meet or connect with.

Most people, in some way shape or form, want to help. When we’re asked a question, we typically try to answer it. Better yet, once the question is asked, the mental Rolodex starts spinning. All depending, the question will remain (in the brain) until it’s answered; even if the question is posed to someone else in search of the answer.

The point is, the act or art of networking is much easier than most believe. Taking these few thoughts into consideration will help you realize the easiest thing about networking is you!

Thinking of hiring a coach? Connect with Reginald Jackson Sr or browse our directory of career coaches and request a FREE consultation!

About the Author Reginald Jackson Sr

Reginald is a United States Marine Corps veteran and served on active duty for more than 20 years. Since retiring from the Corps in 2007, he has held various leadership positions in the IT industry, to include consulting and project management. His education includes a B.S. in Computer Information Systems and an MBA (with a focus in project management). He's currently a doctoral student studying consulting, leadership development, and coaching. Reginald is a member of the International Coach Federation and has also served as a mentor coach; training others in the profession of coaching. Connect with Reginald on Noomii.