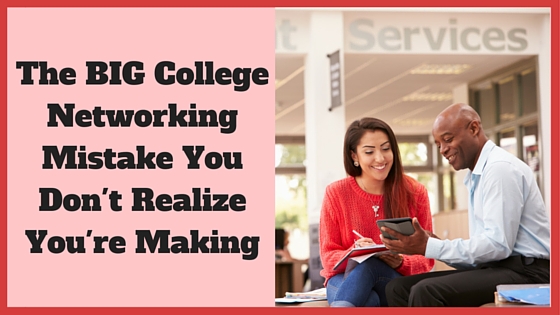 I have to be honest. I made a huge networking mistake in college… and I’m willing to guess that the vast majority of people do as well.

What is that mistake? Let me tell you my college story and see if you can identify it.

I worked hard in college and got good grades. I was a member of a varsity sports team and spent pretty much all my free time with members of that team and a handful of friends who were outside it. These people would later become my best friends in life.

I was pretty sure of what I wanted to do professionally when I got to college, but by the time I was a junior I really didn’t have any idea. When senior year came around and it was time to start looking for a job I searched the job boards and participated in on-campus recruiting.

I decided that management consulting would be a good field to go into since it was lucrative and seemed like a good way to figure out what I was interested in. My job search was ultimately successful and by winter I had a position lined up for after graduation.

Did you see the mistake I made? If not, let me contrast that story with that of a good friend, a guy I’m going to call Steve.

When Steve got to college, he know exactly what he wanted to do. He wanted to go into finance and be an asset manager. Steve did his homework when he got to college and looked at the people on the school’s Board of Trustees.

As is often the case with colleges, a highly successful asset manager was on the board. In the case of his school, it was someone who had been a partner in one of the most famous and successful hedge funds ever. In fact, this individual was closing in on billionaire status.

So, Steve asked himself how he could get introduced to this individual, I will call him Chris. He reasoned that the best way to get to Chris would be to get to know someone at the college who knew the Board of Trustees well. His conclusion was that the school’s treasurer would likely know Chris well.

-And do you think Steve was looking at job boards when he needed a job after college? Of course not, he was already wired into the most connected and influential people on campus.

In fact, years later Steve did work for Chris and is well on his way extraordinary wealth.

So, what is the networking mistake people make in college?

Students don’t take advantage of relationships with the faculty and staff around them. We tend to focus on relationships with peers and while this is tremendously important in terms of building lifelong friendships, it often does very little for your career.

Now, I want to point out a couple things about this story. First, Steve knew exactly what he wanted to do from day one of his college experience. And naturally, it is easier to figure out how to build a network if you know the direction you are going.

However, even if you are not clear which direction you are going, the following actions can be very helpful in advancing your career:

As you read the above, it may seem very political, calculating or even underhanded. I know that as I saw Steve doing these things in college, that is the way I felt.  Now, with many years of perspective, I can tell you that what he did was brilliant.

You may not know what you want to do in your career, but I guarantee you that there are people out there who can help you be successful. Look for ways you can help them succeed (e.g. by giving a student’s perspective to an administrator) and you will be well on your way to building the relationships that can turbocharge your career.

Thinking of hiring a career coach to help you find your dream career after college? Connect with George Karris, browse our directory of career coaches or request a personalized coach recommendation!

About the Author George Karris

George Karris is a former corporate executive who coaches professionals on how find opportunities that balance their ambition, purpose and overall happiness. He has a track record of professional success that includes setting strategy for a $4B firm, raising millions for a startup, and leading a team of over 200 people. He has an MBA from Harvard Business School and has studied positive psychology with Tal Ben-Shahar, Shawn Achor and Tony Schwartz. Connect with George on Noomii and his website.