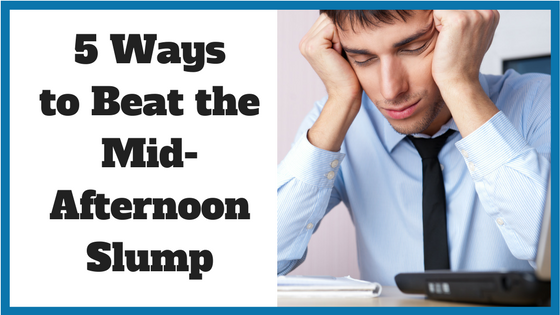 5 Ways to Beat the Mid-Afternoon Slump

Do you find yourself feeling sluggish between 2:30 and 4:00 in the afternoon?

If you’re working in an office, you’ll probably be familiar with the listlessness that sets in amongst your colleagues at this time. A few desks over, someone who was typing furiously in the morning is now staring blankly at their screen. A few desks over from them, someone is nodding off.

Welcome to the mid-afternoon slump, which is definitely a real thing. The science behind it is complex, but broadly speaking, the tiredness you feel at this time is probably the result of a drop in your body’s core temperature. This sends a signal to your brain to produce the chemical melatonin, which makes you feel sleepy. The same thing happens at night, only more powerfully. It’s a natural part of your circadian rhythm.

Here’s what to consider doing when your body’s telling you to take a nap.

Just go with it

Taking a nap might not be such a bad idea. According to the National Sleep Foundation (NSF), the jury’s out on whether humans are “natural” monophasic sleepers (ie programmed to sleep for just one period in 24 hours). If we are, it would make us the minority among mammalian species, 85% of which sleep for several periods throughout the day.

Numerous experts, however, recommend that we listen to our bodies during the mid-afternoon slump and get some shut-eye. When it comes to how long to nap for, the NSF suggests a quick snooze of around 20 minutes or a sustained period of sleep lasting around 90 minutes. Wake up somewhere in the middle and you could end up feeling groggy.

This is a solution best suited to those who work from home, of course, or those with the flexibility to go home mid-afternoon. It is definitely not advisable to crash under your desk at the office.

A snack could give you the jump-start you need to get through the mid-afternoon slump. When you’re feeling drowsy, your first instinct might be to go for carbs, but there’s evidence to suggest that protein might in fact be what’s called for.

At the same time, too much protein (and salt) might bring on the infamous ‘food coma’ – that feeling of sleepiness you get after eating a big meal. Moderation is probably the key here. Choose light snacks that are low in sugar, such as Greek yoghurt and blueberries, a handful of nuts (almonds, pistachios and walnuts are good options) or a boiled egg.

The last thing you want to do when you’re feeling drowsy is exercise, but it’s generally accepted that a bit of movement can boost your energy levels. It’s not fully understood why this is, but it may have something to do with the brain’s increased production of the mood-regulating chemicals serotonin or norepinephrine during physical activity.

Just getting up and walking around the office or the house can make you feel more alert, but for added reinvigoration, you should go for a brisk walk in the sunshine: our circadian rhythm is tied to sunlight, which is also thought to increase the production of serotonin.

And if all else fails… have a cup of coffee

Go on then. You’re allowed. Sometimes, you just won’t have the opportunity to take a nap, make yourself a healthy snack or get some exercise and sunlight. In these dire situations, feel free to get yourself a cup of coffee. The caffeine will energize you in the short term. If your consumption isn’t high and you don’t have an underlying health problem, it probably won’t do you any harm.

As with so many things, the trick is not to fight what your body’s doing, but to make the best of it. The mid-afternoon slump need not leave us stumped: experiment with the above tips and see what works for you.

Thinking of hiring a career coach to help you find your dream job? Browse our directory of career coaches and get a FREE consultation or request a personalized coach recommendation!

How to Relieve Stress for a Productive Day at Work