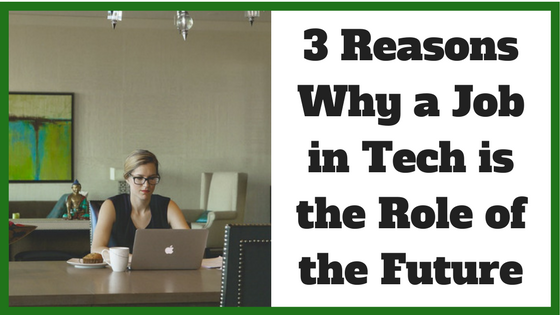 The workplace is evolving and it’s evolving quickly. Staple jobs of the past are beginning to fall by the wayside and it’s left a lot of people fearing an uncertain future.

A recent study by McKinsey & Company suggests that nearly a third of tasks in 60% of roles are at risk of becoming automated in the near future. It states that less than 5% of occupations could currently be fully automated by technology, but the majority of occupations have the potential to be partially automated.

As Stanford University academic Jerry Kaplan writes in his book, “Humans Need Not Apply“, automation is coming for you no matter what your profession and there are many in today’s workforce who agree with him and believe that humans will be left jobless due to technological advances providing a cheaper alternative.

However, this is not the case and here’s three reasons why a role in tech will keep you in work.

Although many may feel that they’ll be left without the required skillsets when thousands of jobs are redefined within the next 20 years, technology is providing new opportunities and has been doing so for the last 144 years. What it has meant though, is that the once-prominent roles of the past are now no longer in demand, with technology bringing a host of new roles to the forefront.

That’s why, as technological advances continue to rapidly develop the way the workforce is changing, a job in the tech industry is increasing in demand. Cloud-based software is fast becoming a key component of businesses in many trades. With business management software suites, such as NetSuite, allowing companies to easily streamline important operations, gaining certifications can boost your chances of keeping up with the tech takeover.

A recent tech salary survey shows that only one-in-five respondents had a foundation certification, but four-in-five expected their workload to increase in the next 12 months because of NetSuite and companies migrating to the software.

Now is the time to strike, too. Database administrators in the UK, United States and Canada can all expect significant pay rises as they progress through the ranks. In the UK, a junior could see their wage rise by up to £12,000 after progressing into an intermediate role, while a US junior can expect a rise of up to $50,000 by the time they reach seniority.

As shown, there is great potential to increase your salary in a tech role. In 2015, professionals in the industry saw their wages increase by an average of 8%. Bonuses were also up too, with 37% of IT employees stating that they had received a 7% increase on their bonus compared to the year before, according to a Dice.com survey.

A study by Paysa found that a job in the tech field is more lucrative than becoming a professional sports player. The average career in the MLB lasts just five and a half years with an earning potential $2,912,000, while the average lifetime earnings for an engineer tops $5 million thanks to the typical  $125,480 yearly salary.

Also, it is obvious that a distinct minority succeed in carving out their desired career in sports. However, the odds are much greater if you are looking to settle into a role in tech. Recent stats show that six out of 10 students studying engineering at university graduate, with 97% going on to land a job in the field.

With a huge proportion of millennials holding a role’s flexibility in higher regard than pay – and more than one-in-three of the workforce now being millennials – not having a rigid work pattern is clearly important. Thanks to technological advances, the opportunity to dissolve the once-desired 9-to-5 is possible in most tech-based roles.

Nathan Murphy, the chief web designer and owner of GoInspire, admits that the rigid working day pattern was a big reason for why he wanted to change his future. “I’m not a fan of the 9-to-5, Monday-to-Friday schedule,” he says. “I decided I wanted to work my own schedule and on my own terms.”

Along with the attraction of flexible shifts, positions based on the use of technology allow workers to operate remotely. “Last year I was able to work remotely in Malta,” continues Murphy. “The power of the internet means that you never need to be in the same office in order to get a job done. With many of my clients being based around the globe, technology has allowed me to sustain my workflow in order to continue doing what I love.”

Homeworkers believe they are more productive than office workers, a Canada Life survey found. With the ability to wear what you want, opt out on the ever-growing commute and exercise more frequently, stress levels are lower if you are allowed to work remotely, meaning it’s an option that many are deciding they’d like to take up.

So, although popular jobs of old are risking extinction, technology is continuously providing new challenges in the workforce and by keeping up with trends, you can mould your perfect career.

Thinking of hiring a career coach to help you break into the tech world? Browse our directory of career coaches and get a FREE consultation or request a personalized coach recommendation!

About the Author Jamie Roberts

Jamie is a UK-based writer who is passionate about tech, travel, sports, and combining the subjects together. You can follow Jamie on Twitter.

How to Relieve Stress for a Productive Day at Work