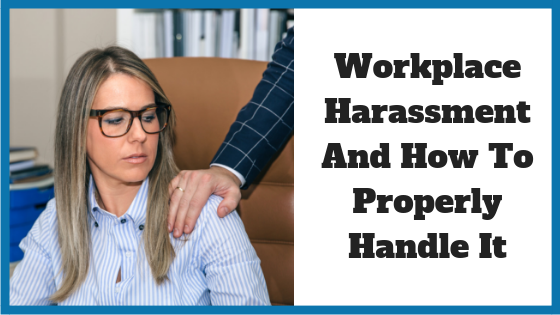 When you leave school and enter the work world, you may assume that bullies are gone with the school/college days. However, this is far from true. Workplace bullying and harassment are just as common, but isn’t always clearly defined.

In the workplace, people take up different positions in the company’s hierarchy and it isn’t uncommon for those prone to offensive behavior to abuse their position as the means to harass other workers, especially those that rank lower than them. The unsettling fact is that the harassed are often afraid to report what is going on because they fear losing their job, or retaliation if the situation is seen in the favor of the harasser.

This is why companies and employees need to approach this issue very seriously, stand in defence of those who are bullied at their workplace and take all the necessary measures to either prevent such things from happening or by working together to resolve the issue if it has already happened.

Harassment in the workplace wears many faces. It can vary, from “smaller” cases such as offensive jokes revolving around another person’s age, race or ethnicity, through “intermediate” situations like slurs and name-calling, to the worst kind of harassment such as threats and physical violence out in the open. Among the worst cases are situations where sexual harassment is present, when, for example, a person with a higher rank persuades a person to succumb to their sexual advances because otherwise they might have trouble with their job or even lose it. A common “quid pro quo” case is when a supervisor promises that the victim will get promoted if they endure their advances.

On the other hand, there is a kind of harassment where the person isn’t threatened by missing out on job opportunities or losing their position, but are the object of derogatory comments, ridicule, provocation, teasing and so on. This is known as a hostile work environment. While these comments may come in the form of attacking the employee’s protected characteristics like age, gender, race and disability, they may also be more subtle, such as the case where a supervisor treats workers of a particular ethnicity better than others.

It’s essential to know that harassment crosses the legal boundaries only if the victim finds the behavior and comments insulting. When someone is constantly being offended according to a protected characteristic or a victim of violent threats and actions, there is no question whether this sort of behavior is “welcome” to the victim. Still, there are situations when a person doesn’t find sexual advances and jokes insulting and even responds to them in the same manner. In this case, the mutual interaction is obviously wanted and, even if it crosses a line, it will be a lot harder to prove that this kind of behavior was a form of harassment.

When it comes to harassment in general terms, you need to know that it becomes a legal issue only once it forms a pattern. If an employee asksanother one out on a date once or makes a teasing comment that one might find offensive, it does not make ground for a case of harassment at the workplace. On the other hand, sometimes a single action can be enough, as in the case of physical violence or unwanted touching. Of course, there is no particular number of situations that makes the case a true problem. The court will always look at the circumstances and the wider context of the situation.

Sydney lawyers underline the importance of the victim having a professional on their side, so that they can outline the issues, determine the pattern and have a better chance of proving to the judge and the jury that they have been harassed at work. The first appointment that they have needs to include the correspondence between the designated supervisor and the employee who is accused of harassment and any kind of evidence that proves that such an event had transpired. This way the lawyer is able to properly assess the situation and understand the claim well enough to help the alleged victim. The abused side needs to be fully aware of their rights and options. Furthermore, harassment at work can have debilitating mental effects on the victim, so they should also be instructed on what kind of psychotherapeutic treatment they should try out.

How to deal with harassment at work

Your job as an employer is to reach as fast as possible as soon as you learn about harassment going on in your workplace. You need to follow both the legal guidelines and your company’s policy. Your supervisors and managers should to be trained in ascertaining and handling such issues. This, of course, doesn’t count if they are the ones accused of harassment.

Still, there are some rules that need to be followed. For starters, the supervisors and managers should not be the ones to inspect the situation on their own, unless they are specifically assigned to do so. In most cases the person who has faced harassment will to report their complaint  to the HR director, their supervisor or manager or another person that is responsible for this course of action.

When a case of sexual harassment happens, it is the best idea to put the person of the same gender in the shoes of the investigator, so that they can be more objective. When a complaint is filed, the investigator should get a detailed course of events from the victim. This includes when and where it happened, who was involved, who witnessed the incident and of course, the very nature of what happened. It is essential that the person investigating the situation sticks to facts. Personal perceptions, speculations and conclusions need to be avoided.

The fact is that harassment of various kinds happens in the workplace. People that have been prone to undesired and violent behavior in the past will probably expand their extent of bullying others once they have reached a certain position and rank in your company. It is up to you as an employer to react to such situations right away, or you will be the one seen liable for them happening.

Harassment comes in many forms, some quite obvious while others a lot more subtle. It is essential that you investigate each claim made by an alleged victim and report it to the personnel responsible for dealing with it, such as HR directors. Make sure that your work team has a discussion so that every knows that they should get professional help when it comes to building ground for a proper case.

Thinking of hiring a career coach to help you find your dream job? Browse our directory of career coaches and get a FREE consultation or request a personalized coach recommendation!

About the Author Emily Wilson

Emily is a business psychologist with a passion for marketing. Researching, exploring and writing is her favorite thing to do. Besides that, she loves animals, music, and traveling.