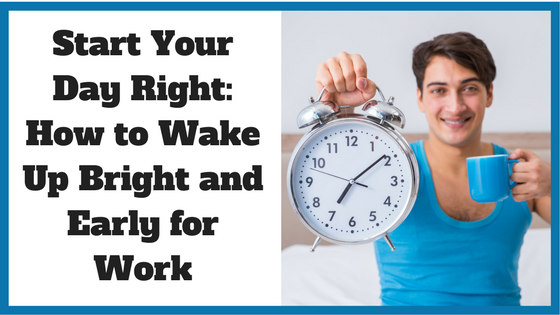 Start Your Day Right: How to Wake Up Bright and Early for Work

We all know a lark – one of those people who leaps out of bed every morning at 6am (or earlier). Since you’re reading this article, it’s probably safe to say that you’re not a member of the dawn chorus.

If you find early mornings difficult, you’re not alone – only 8% of over 15,000 respondents to a survey conducted by the retailer Dreams claimed to always wake up feeling refreshed, while a worrying 27.8% said they never do.

At university, many of us are given a reprieve from mandatory early mornings. When we find ourselves in our first 9 to 5 job, it can feel like school all over again. Years after entering the world of work, we may still be in a rut of snooze-button pressing, skipped breakfasts, inside-out clothing, frantic dashes to the office and slaps on the wrist for lateness.

Some people get into the (circadian) rhythm, and learn to tolerate (or even enjoy) rising early – only for a new job or move to necessitate setting an even earlier alarm, throwing them off-kilter.

The first step is, obviously, to go to bed at a reasonable hour. Allowing yourself to wind down before you turn in is also important, as is avoiding screen time in that hour or two.

Plenty of people follow this advice, manage a decent amount of sleep, but still struggle to open their eyes in the morning. If that’s the case (and you don’t have a medical condition affecting your sleep, like sleep apnoea), the following tips might help.

Ease rather than jolt yourself into a new sleep pattern. Adopting a staggered approach to waking up earlier will allow your body to slowly adjust to the transition. Trying to force yourself to get up an hour or two earlier right from the get-go could prove very uncomfortable, causing you to become disheartened and return to your old ways.

You could compare it to going cold turkey when trying to quit cigarettes – a lot of people who try this end up throwing in the towel pretty quickly.

Instead, taper. Take it ten minutes (or one less press of the snooze button) at a time. When you feel you’ve got a handle on waking up at 7.50am instead of 8am, move the time back to 7.40am and so on.

Once you’ve got to the point at which you’re no longer pressing snooze, place your alarm at the other side of the room, so you have to get out of bed to stop it from ringing.

Get yourself a glass of water as soon as you wake up. Hydration increases alertness, while dehydration impairs it – and if you’ve had a good six to eight hours of sleep, you’re likely to be dehydrated.

According to entrepreneur and writer Phil Dumontet, when it comes to summoning those get-up-and-go feelings in the morning, hot showers aren’t your friend. In fact, a steamy shower will just make you more sleepy. Instead, once you’ve finished washing yourself, you should try to endure a 30 second blast of cold water, followed by another 30 seconds of hot and then a final 30 seconds of cold.

This means your body temperature won’t suddenly plummet when you step out of the shower – as it would have had you kept the water warm. It’s this rapid cooling of your body post-shower that leads to sleepiness. Dousing yourself in cold water will have the opposite effect, leaving you stimulated and ready to take on the day.

As with most good habits, waking up early gets easier with practice. Expect discomfort, but try to power through. If you do, you might end up finally putting to bed your trouble with waking up early.

Thinking of hiring a career coach to help you find a job you jump out of bed for every morning? Browse our directory of career coaches and get a FREE consultation or request a personalized coach recommendation!