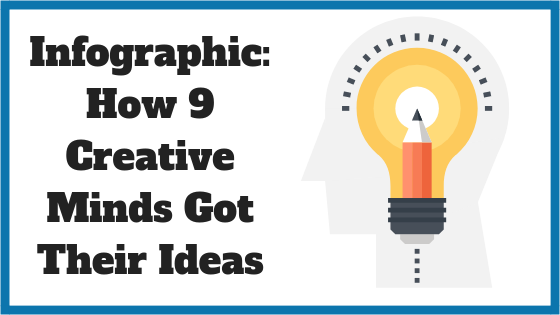 Infographic: How 9 Creative Minds Got Their Ideas

When you think about creative jobs, what probably comes to mind is being an artist, a writer or perhaps even an athlete such as a soccer or tennis player. But there are few jobs that don’t include at least an element of creativity, even if they seem pretty uncreative on paper.

Most jobs feature a bit of problem-solving from time to time, which definitely requires your creative mind to get working! And that doesn’t mean you need to be an engineer or a scientist. If you deal with people on any level then you’re probably solving problems every day without even noticing it… until you get stuck.

This is why it can be super-helpful to apply creativity techniques to problems at work, even in areas that don’t seem creative in the same way as painting or designing. Reframing difficulties as creative challenges rather than stubborn obstacles can free you up to not only solve the issue at hand, but innovate towards better practises and work flows in the future.

So next time you face a ‘brick wall’ at work, instead of smashing it down or walking in the opposite direction, take a few minutes to rest and think about alternative ways around it. And if your creative mind has been dulled by years of repetitive work, you can always turn to our greatest creative minds for advice. Spoiler: they weren’t all artists!

Steve Jobs, for example, was an entrepreneur: but somehow he’s thought of as much more than that – the best job title for Steve Jobs is ‘Steve Jobs’. He became a household name not for the amount of money he made, but the way he went about it – designing and marketing devices in ways nobody else had imagined.

And how did he make his creative breakthroughs? If you know some of the other stories about his eccentricities, you won’t be surprised: he bathed his feet in toilet water!

In the early days of Apple, this is how he would cool off when the stress was getting him hot under the collar. And while it’s tough to recommend this precise method of resetting your mind and zenning-out, you can certainly adapt Jobs’ principle to your own preferred level of foot hygiene. Whether it’s standing in a bucket of cold water or going for a foot massage, taking care of your feet is a great way to relax and get you out of your head for a few minutes. Hopefully, when you return, things will seem a bit clearer.

The good folks at Business Backer have created this wonderful new set of gifs demonstrating creativity hacks like Steve’s, used by an assortment of people from artists to inventors. Next time you have a problem at work, remind yourself it’s okay to be creative by borrowing one of these great tips for sparking a moment of creative genius!

About the Author John Cole

John is a digital nomad and freelance writer. Specialising in leadership, digital media and personal growth, his passions include world cinema and biscuits. A native Englishman, he is always on the move, but can most commonly be spotted in Norway, the UK and the Balkans. Connect with him on LinkedIn.