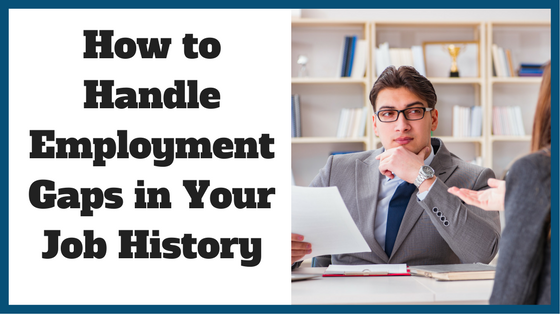 How to Handle Employment Gaps in Your Job History

If there are gaps in your employment history, you shouldn’t worry too much. Yes, hiring managers will pay attention to them. Yes, they would like to get an explanation. You don’t want them to assume that you were lazy or you were unable to get a job because of lack of qualifications, you want to make the best impression.

When you’re presenting a resume with employment gaps, you should definitely know how to make a case out of them. Here are seven tips to help you do that.

Be upfront about it

It’s best to be honest about your employment gaps instead of hoping they will go unnoticed. If there is a gap in your employment history, there’s no way for you to mask it with fiction. If, for example, there was a long period of unemployment, such as two or three years, do not try to minimize it by adding fake information or extending the dates of the previous employment.

It’s especially important to address the recent gaps in your resume. If the gap occurred ten or twenty years ago, it’s not necessary to talk about it. It’s no longer relevant and the potential employers won’t pay attention to it.

Instead of starting the resume with the experience section, lead away with a qualifications summary. With this method, you’ll emphasize the value of your skills. When you get a potential employer’s attention with impressive qualifications, they likely won’t worry about the gap as much.

List the accomplishments for all positions you maintained. In short, emphasize the value you brought to each position you had.

It’s impossible to change your job history. However, it is possible to show how great you are as a candidate by showing that you could bring value to this company’s team.

Round up to the year

If you left a job in January 2012 and you started a new job in December 2014, you can make the gap seem less significant if you leave out the months and mention the years only. If you opt for this format, make sure to keep it consistent throughout the entire resume.

You may use the months only when they do you a favour. If you were unemployed from October 2012 to April 2014, for example, stating the months of the employments will make the gap seem shorter.

Did you do temporary work in between two more significant employments? Were you engaged in community activities? Did you volunteer? Did you work on part-time projects as a freelancer? If you were engaged in any way, make sure to list the experience in your resume.

However, you have to be specific. Mention the precise organization you were engaged in and list all responsibilities.

Millianna Roberts, HR manager at Superior Papers, explains how important freelance jobs can be in filling in the gaps. “Freelancing gives you real experience. It’s not something you can think about after making a gap in employment, but it’s definitely something to consider during the gap. Such a job won’t only make your resume look better, but will also give you experience that’s quite popular with today’s employers.”

If you present the gap in employment as a period of professional and personal growth it will be a positive aspect in your resume. Did you take online courses? Were you studying for certificates? Did you return to college or university to complete or earn another degree? If you used this time to improve your skills or gain any new ones, mention that in the resume.

Needless to say, you’ll have to show proof that you were really engaged in professional growth. If you were studying for a certificate, you’ll need to present that certificate. If this was about personal growth that you can’t really prove, you can mention it in the cover letter.

Present it as a professional sabbatical period

Many organizations give a longer paid leave to some of their workers, so they can study or travel. This is the so-called “sabbatical leave,” which is not really an employment gap. They don’t need explanations.

Maybe you took this kind of leave because you were sick or you had to take care of a sick family member. Don’t be negative about it. You shouldn’t get into details explaining these leaves. If you returned to the same organization after the leave, you can simply write “professional sabbatical time” to justify the gap.

Get ready to elaborate

Did you get called for an interview? That’s great! If there was a gap in employment in the resume, however, you should get ready to elaborate on it during the interview. The resume doesn’t give you much space for details. Now, you can be more specific and explain that the gap was not really a bad thing.

Having a gap in employment doesn’t mean that you don’t deserve a new job. You do! You just have to prove that to the employers. Hopefully, you’ll be able to do that if you follow the tips above.

Thinking of hiring a career coach to help you land your dream career? Browse our directory of career coaches and get a FREE consultation or request a personalized coach recommendation!

About the Author Sophia Anderson

Sophia Anderson is an associate educator, freelance writer and blogger. She is passionate about sharing her knowledge and experience with other people. She believes in the driving force of positive attitude and constant development. Feel free to get in touch on Twitter.