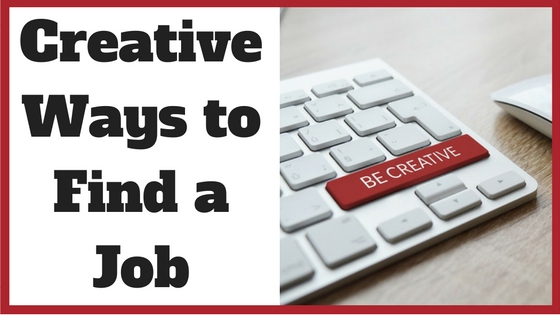 Creative Ways to Find a Job

One of the most persistent myths of job searching is that you can get a job by simply applying online. The truth is that for a host of reasons you really can’t count on an online job search to deliver much, you have to do more to land an interview and get hired.

So, what do you do once the online search has failed, your attempts at professional networking haven’t led to results and you are out of ideas?

It’s time to get creative. Here are a couple stories of creative attempts I made in personal job searches earlier in my career:

FedEx to the president

I have always loved teaching and education and for many years I taught sailing to adults and teenagers while I was in college.

I also had recently learned to fly airplanes, which I thought was great fun. So, at age 30 or so I identified what I thought was a really cool company to work for: King Schools.

Chances are you’ve never heard of King Schools, but they deliver tons of online learning courses to people looking to become pilots. Thus, I thought it would be a great place to work.

After all, I liked flying and I liked education

But when I looked online there were no jobs available. So what did I do? I figured out who the president of the company was by searching online and then sent an overnight letter via FedEx to him at the company’s address.

Now, imagine this: You’re the president of a company and suddenly an overnight letter comes to you from someone you’ve never heard of. You are going to open it or at the very least your assistant is going to open it and hand it to you.

Well, I didn’t get a reply from the president, but I did get one from the chief operating officer. They didn’t have any positions at the moment, but he was at the very least encouraging of my efforts…

So, I tried it again, only this time to the US President of Beneteau Sailboats, which is a huge global sailboat manufacturer.

In my letter I told him how I used to teach sailing on his boats and how I thought they represented a great value. I also talked about my lifelong passion for sailing.

He called me back and we had a very pleasant conversation until he asked me what sort of compensation I was looking for. It turns out sailboat manufacturing doesn’t pay what I hoped it might.

At an earlier point in my career I tried a different approach. I was a year out of college and needed work.

Through a friend of a friend I knew of a highly successful real estate developer in the area. I asked if I could meet with him for 30 minutes to get some career advice.

Then I went to his office and said something to the effect of: here’s who I am, this is what I’ve done, I’m super impressed with you and I think I would be a very valuable asset to your team. I will happily work for you for free for a couple weeks to prove it. If you think I do good work, we can talk at that point, if not, we’ll part as friends.

Well, he couldn’t say no. Smart, successful entrepreneurs seldom do because they see the same hustle in you that they see in themselves. Plus, they always have something they have been thinking about doing that they don’t have time for.

I ended up doing research on the self-storage industry for a couple weeks. It was interesting, but not quite the opportunity I was looking for.

After two weeks I gave him my results and suggested that this probably wasn’t the right opportunity. He offered to pay me for my time and I politely declined. My thought was that sticking to my word around working for free was worth more.

So, if you read the above stories, you can pretty quickly determine that my creative attempts were zero for three. A complete failure, right?

Not exactly. I spoke to the presidents of two organizations and got a note from the COO of a third.

In each case I learned a bit about their businesses and created a new relationship.

Ultimately, each of those job searches ultimately led to me finding a position via networking.

In one case I had coffee with someone who, upon hearing my story, said, “You need to talk to the guy at the table over there.” So, I did and he later introduced me to someone else and I found a great job.

The point is that you never know what is going to lead to a new role, so stay at it.

If I were in the same situation today, I would consider one additional strategy: I would put together a one-page website and start offering freelance services.

An individual named Ray who used to work on my team recently moved to a new city and put this into play himself. He told every business owner he met at his new church that he would do website & marketing work for free to gain experience.

Guess what? Pretty soon he was working for a bunch of companies and then was able to charge new clients as he got referrals. He was suddenly in business.

By pushing the envelope and continually trying new things, you can ensure that your job search doesn’t last long and that you quickly make progress towards bigger and better things.

Thinking of hiring a career coach to help you land your dream job? Browse our directory of career coaches and get a FREE consultation or request a personalized coach recommendation!

About the Author George Karris

George Karris is a former corporate executive who coaches professionals on how find opportunities that balance their ambition, purpose and overall happiness. He has a track record of professional success that includes setting strategy for a $4B firm, raising millions for a startup, and leading a team of over 200 people. He has an MBA from Harvard Business School and has studied positive psychology with Tal Ben-Shahar, Shawn Achor and Tony Schwartz. Connect with George on Noomii and his website.