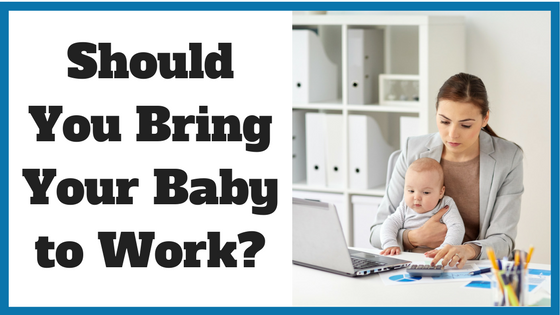 Should You Bring Your Baby to Work?

If you had to describe your ideal office, “creche” would probably not be the first word to spring to mind. Spare a thought, then, for the employees of Addison Lee. In 2012 the cab firm ran a pilot scheme which allowed new parents to bring their little ones into the office full time.

There were plenty of reasons it could have been a disaster. But, incredibly, the firm said the experiment was so successful that they made the scheme permanent. And they’re not the only ones: 170 babies-at-work schemes exist in the US. (There is a greater need for such schemes in the States because it lacks mandated maternity and paternity leave).

While the idea of bringing your baby to work is still in its infancy, the concept is gaining momentum. But the logistics of bringing creatures famous for their screaming and pooping into professional workspaces seems far from child’s play.

So, do such schemes really bring tangible benefits? And if they fail, who will be left holding the baby?

A survey of new mothers by the National Childbirth Trust found that one-in-10 will definitely not return to work and a further 9% are considering staying home. For their employers, this represents a big cost: replacing an employee costs the equivalent of 6-9 months’ worth of their salary. Moreover, people are waiting longer than ever before to become first-time parents, meaning they are more likely to hold the sort of high-ranking position that comes with particularly large turnover costs.

By allowing new parents to bring their baby with them to the workplace, employers increase the likelihood that they will return to work. (Most parents cite the cost of childcare and not wanting to be away from their child as their top reasons for staying home). Moreover, such schemes foster loyalty amongst the staff who use it, meaning they’re also more likely to stay with the company after their tot is grown. This may become increasingly important as millennials – notorious for job-hopping – become parents.

Any parent-friendly policy should be designed for parents, not just mothers. However, it is an inescapable truism that women still make up the vast majority of primary care-givers for small children. Because many of them subsequently drop out of the workforce or move to part-time work to support this, they generally end up retarding their career. This, in turn, contributes to societal problems like a lack of women in high-powered jobs and a persisting gender pay gap.

Giving primary caregivers the option to bring their baby to work stops them having to make a choice between the two. Moreover, if both parents work at baby-friendly companies, they can share breadwinning and childcare equally.

Many new parents talk about how hard it is to be away from their newborns, and how guilty they feel for missing out on many of their baby’s “firsts.” Having their child at work allows them to have that valuable bonding time without having to give up their job. It also reduces the stress many parents feel at leaving their little ones with someone else and having to constantly worry about their wellbeing.

Employers often underestimate the effect low morale, stress and other negative feelings can have on the productivity of their workers. Being able to alleviate these symptoms may make baby-in-tow workers more productive than they would have been if they’d left the tot at home.

It seems mean to describe a baby as attention-seeking, but the demands newborns make upon their parents are both numerous and time-consuming. It therefore seems inevitable that babies at work would be constantly distracting employees, who would take significant time away from their desk to deal with their kid’s needs.

Even if the child did sleep quietly for eight hours a day, it is difficult to imagine new parents having the self-restraint to not fuss over them. Add in the co-workers who will inevitably stop by to play with the baby and congratulate the parent, and it may be difficult to envisage how the new mother or father will get any work done at all!

Baby-scheme workplaces have attempted to solve this problem by having a “backup” caregiver to look after the baby while the parent is focusing or in a meeting, but this option raises a host of problems of its own. In particular: would co-workers feel co-opted into this babysitting role and unable to say no, particularly if the parent is their manager or senior to them? Babysitting is so far out of the regular office job description that it seems unfair to force people to pick up this duty.

Con: Unfair on other workers

Babies don’t just distract their parents, but all the other people around them. Such interruption seems particularly unfair for co-workers who either don’t like kids or don’t agree with having them at work. Should such staff feel that the introduction of small children means they’re unable to complete their own work as quickly or as to as high a quality, it’s likely to cause a backlash.

Luckily, this has a relatively simple solution: moving parents and babies to their own area or office and putting a ban on babies in meetings.

Babies don’t just cause disruption – they can cause actual damage, as anyone who has left a toddler alone with a crayon box will know. Curious kids let loose in the office could mess up files, pull things over, upchuck on staff and so forth.

It is impractical to insist parents never lets their attention wander from their child, but one solution could be to ban babies from the office once they get to the walking stage. This measure is already used by many baby-friendly companies, including Addison Lee. Similarly, the employer could reserve the right to ban particularly rowdy babies from the office altogether. Whether that would cause consternation from the badly-behaved babies’ parents is an open question.

Con: Babies are a legal liability

Smart companies are always worrying about getting into a legal entanglement. Babies in the workplace add a whole new layer of complexity: what happens if one of them gets hurt? Could the employer be sued for negligence? Even if they couldn’t, such an at-fault incident could undoubtedly cause company morale to plummet.

The potential for inadvertent (or even intentional) harm is exacerbated if babies are routinely left in the care of their parents’ co-workers. Accidents happen, but if the parent blames the staff member for the incident, a spiral of persecution, demonization and even firings could result. Should such a thing happen, the negative aftershock on the whole office could be catastrophic.

Are you a stay-at-home mom looking to rejoin the workforce? A career coach can help! Browse our directory of career coaches and get a FREE consultation or request a personalized coach recommendation!

About the Author Beth Leslie

Beth Leslie writes graduate careers advice for Inspiring Interns, who specialize in matching candidates to their dream internship. Check out their graduate jobs" listings for roles.