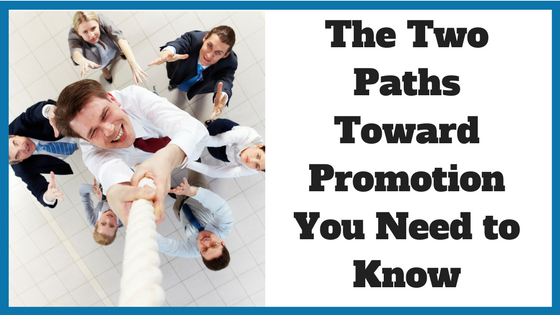 The Two Paths Toward Promotion You Need to Know

So you’ve just heard about a promotion opportunity — whether it’s a new position in your company or the current holder is leaving for whatever reason. You haven’t been offered the job and aren’t sure if you will be. Should you wait for an offer or should you take some sort of action?

This is one of the most important factors affecting career development, so it’s no wonder that it’s is a common dilemma for many middle managers and other senior staff. On one hand, you really want to be promoted and know you deserve it. On the other, since you haven’t been offered anything, maybe your organization thinks differently. And as each day passes, things become increasingly hard to swallow, as you begin wondering why you haven’t been offered the job. Anger and frustration build up, even with feelings of being personally offended by your boss! And all of this without even knowing why they’re not promoting you.

Why haven’t I been asked?

So you begin asking yourself: Why haven’t I been approached? Why am I not good enough? Why is someone else being given the job? The “whys” don’t stop. And you’re soon on the fast track to complete hopelessness, which can be one of the negative factors affecting career development.

Asking “why?” doesn’t help. This is the time to stop dwelling on the “whys” of others and concentrate on yourself – and the active role you need to play in getting that promotion.

The first thing you need to do is check your facts. Find out if there’s really an opening. Maybe it’s just a rumor and all of this hopelessness is wasted energy. However, if there’s really an opportunity out there, check when it’s supposed to become available and if there are already candidates lined up. As soon as you’ve gotten this basic information, you’ve have two possible paths to follow for approaching your boss: directly or indirectly. I’ll explain both below. Afterwards, you’ll need to choose the one that seems best for you at this time.

The advantage of approaching your boss directly is that it puts your desire for promotion right on the table. If your boss hasn’t considered you before, they can no longer ignore that you would like that promotion. But it’s not just about storming into their office one day and confronting them. Before you approach your boss, you have to do your homework, which means building a sound case for your promotion. Doing so will prompt your boss to think long and hard before dismissing your candidacy.

On the other hand, if your boss tells you that you’re not going to be considered, this is the time to ask why. Listen carefully, as this is valuable information that will help you make your own career decisions from now on. I want to repeat what I said about preparation. Do your homework and be ready to state your case with hard facts.

The advantage of approaching your boss indirectly is that you might simply feel more comfortable than possibly challenging them head on.

One way of approaching your boss indirectly involves getting your message across through others. The important thing to remember here is that the “others” must be the right people. Otherwise, your message could be misconstrued or even worse, sabotaged.

Another option for approaching your boss indirectly is by broaching the subject of promotion from a very general point of view. Without revealing that you know about a possible opening, inform your boss that you’re interested in a promotion and ask what they think about this. For example, ask if they think it’s right for you at this time. This kind of open talk is important for two reasons:

Whether you decide on Path #1 or #2, don’t ever give up on pursuing the promotion you want, just because it hasn’t been offered. True, while not being offered a job can be disheartening, there’s probably a myriad of reasons, which you’ll probably never know. So concentrate on what you can do and take action yourself.

If you have any questions about this post, I’d love to hear from you.

Great managers are made. Not born.

Want to Make a Career Change? Consider These Points First