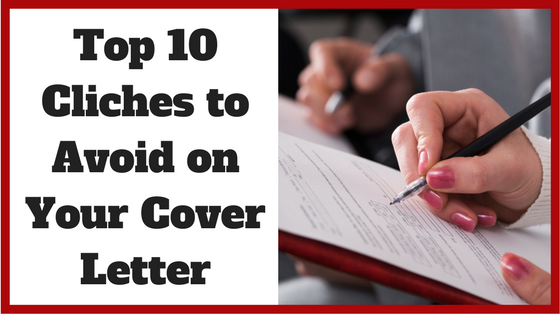 Top 10 Cliches to Avoid on Your Cover Letter

But if we know all that, why do we keep repeating the same clichés in our cover letters over and over?

Well, because there are two popular misconceptions that encourage us to do so. One being that “no one reads cover letters anyway” and the second one is, “my cover letter has to fit certain standards.”

Let’s start with the second one. Sure, a cover letter has to fit certain standards – but these standards have nothing to do with clichés. You have to briefly explain why you would be a good candidate for the job and why you would like to work for that company – those are the only essential requirements.

It’s also not true that nobody reads your cover letters, at least not in every case. While it is true that some companies turn to applicant tracking systems (ATS) to manage the influx of applications they get, it doesn’t mean that your cover letter is doomed to get scanned by a machine and dumped.

And even if not ALL recruiters and hiring managers read cover letters, there are some that definitely do – however, they will quickly discard ones that look similar to all of the others. So the more clichés your cover letter has, the higher are its chances to be tossed.

Of course, this doesn’t happen all the time. Sometimes the recruiters don’t mind clichés, but there are also many who won’t take you seriously if you use some of the following standard phrases in your cover letter.

1. I am applying for the position…

However, sometimes you still can and should mention the position – but avoid using this exact phrase at any costs. So many cover letters start with it, so using it will make your letter look just like everyone else’s.

The cover letter introduces you perfectly, not summarizes the whole resume. There’s no need to list all your job experience and other things – they will read it in your resume later. Instead, mention only those things that are important for this specific job. And keep it brief.

3. I am passionate about…

So many candidates use this word and most of the times they don’t use it right. Can you imagine someone actually being passionate about Google Analytics, for example? It looks weird and inappropriate.

Here’s the thing: when you write that you are a fast-learner, the hiring manager might suspect that you are trying to compensate for your lack of experience. You might not use this phrase for that reason, but most candidates do, so try to avoid it.

Sometimes candidates think that describing their personal qualities could benefit them. Actually, it simply looks weird, especially if you are using it without any further explanation. Such things are the ones that people usually say about the others. Moreover, they won’t help differentiate you from the others as most of the other candidates write the exact same thing.

6. I have a proven track record…

Another vague statement that isn’t perceived well by the recruiters. Most likely if you are just including this statement without any details, you don’t have quantified proof, so avoid writing this.

A cover letter is more about showing through examples, not stating facts (that’s where your resume comes in), so it requires more detail when it comes to your “track record.”

7. I think outside the box.

Will recruiter actually believe that when they see you using the phrase most people use? Even if you consider yourself creative enough, find a new and original way to show that to the recruiter. Using a cliché won’t make you look creative at all.

For example, “While working as a content marketer at company XYZ, I pitched an idea for a video series social media campaign. It was something the company hadn’t tried before and it resulted in more followers and more revenue.”

8. I’m the best candidate for the job.

Confidence is a good quality, but overconfidence is not. You don’t know for sure whether or not you are actually the best person for the job. If you write such bold statement, you look like the person using statements not supported by real facts, especially if you aren’t adding anything to support that statement.

Instead, use real life examples when you demonstrated skills that would make you a great candidate. For example, instead of saying, “I am the best candidate for the job because I have many years experience with social media marketing,” you should try something like: “My keen eye for detail and experience with social media marketing allowed me to triple company XYZ’s following on various platforms, increasing traffic that resulted in a record sales month.”

While it won’t make you look bad, it’s basically stating the obvious. Surely the recruiter will do so if they need to ask you something. Don’t make it look like they wouldn’t even think about such an obvious thing before you mentioned it.

10. I look forward to hearing from you

That’s another obvious thing to write. Moreover, sometimes it could simply show the recruiter your lack of initiative. These days many people land a job just because they contact the recruiters again, which further conveys their interest in the position.

There’s another important thing I need to mention. While all the lines that are written above definitely are clichés, the problem lies not in the lines themselves. Some candidates try to use different phrases that have the same meaning, thinking it would change everything – however, the meaning still remains the same.

So if you want to succeed, avoid using all variations of such phrases – and your cover letter will definitely look more appealing.

Need some professional help when it comes to writing your resume and cover letter and going through the job search process? Browse our directory of career coaches and get a FREE consultation or request a personalized coach recommendation!

About the Author Charles Ebert

Charles is a career mentor, motivational speaker & human resources consultant with over 10 years of experience in HR sector. Charles is a lead expert at Professional Resume Solutions. Apart from career mentoring, he loves photography and football. Find him on Facebook, Twitter, LinkedIn and Google+.