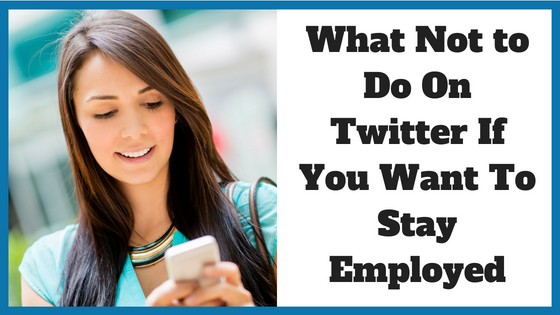 Getting a job nowadays is hard and keeping it is not a walk in the park either. People are readier than ever to put in the effort and even work overtime in order to keep their position and advance in their careers.

Unfortunately, almost everyone is expendable nowadays and with the job market being the way it is, you should at least appreciate the fact that you have a job. However, even if you do everything by the book, you still need to be very careful. Why?

Because most people don’t think about their actions on social media, which can come back to haunt them. Sure, your private life and your job are two separate things, but since you are putting everything out in the open voluntarily, how private is it really? Rest assured, recruiters, as well as your current employer are keeping track of you on social media.

Everything you have posted on Twitter is out there, so even though your account is squeaky clean now, your employer might come across an earlier post that isn’t appropriate. In order to help you stay employed, we have come up with a list of things you should never do on Twitter if you want to keep your job.

1. Posting while at work

Your boss may not be able to view your screen at all times, which means you can catch a breather every now and again and go online just for fun. But still, how can you be sure they aren’t recording your browsing history? And in case you are posting on Twitter, they won’t even have to. They can simply see when you have posted, which can land you in hot water. If you really need to get your Twitter fix, do it during your lunch break.

2. Uploading photos of you drinking

Some companies are very particular about the way they want to appear in the public and the same goes for the behavior of their employees. This is especially true if your job requires you to demonstrate a great deal responsibility (for example, if you are a teacher). Your employer might not be too happy about a photo of you drinking. The same goes if you are trying to land a job. Even if you have a professionally written resume, recruiters may still reject you because of your inappropriate images on social media.

3. Complaining about the company you work for

We get it. Most people hate their jobs and need to vent. Also, even if you absolutely love what you do, you are bound to experience your share of difficult days at the office. The best way to vent would be to talk to your friends and family about it or even with a co-worker you trust. However, the problem arises when you do this on social media. It doesn’t even have to be a tweet. Even if you have complained about your boss inside a comment, they will still be able to see it and hold it against you.

You are entitled to have your own opinion and preferences outside of work, but once you tweet about them, it becomes public. If you are fighting with someone on Twitter or using inappropriate language, your boss will be able to check it out. Also, posting lewd or pornographic images is also off the table if you want to main a decent Twitter profile. And it’s even worse if you decide to do this using the company’s official Twitter account.

5. Calling in sick and tweeting about what you are actually doing

Let’s be honest, everyone has called in sick at some point, if only to recover from a night of drinking or binging on your favorite TV show. And it feels awesome to get away with it, once you get over the whole guilt thing. But, if you are so reckless to tweet about it, don’t be surprised if your boss finds out. You will end being suspended or fired.

If you job involves working for the government and handling sensitive information, you need to be really careful about what you share on Twitter. For instance, sharing the layout of the building or photos from inside the building might prove to be too risky in some cases, let alone sharing confidential information. Even if your job is less sensitive in nature, spilling company secrets will provide your competition with an edge over your employer, and that way, everybody loses.

7. Making fun of the clients

If your company is handling a client which you don’t like, you will need to set your feelings aside and do your job. If you hate their product, their company culture, or what they stand for, you will need to remain tight-lipped, at least when it comes to your Twitter activity. Otherwise, the client might see it and they might hire some other company instead of the one you are working for. Your company will end up losing money because of you, and there is simply no way to get out of that kind of mess.

8. Making fun of your boss

Making fun of the company is bad. Making fun of your boss is worse because there is a personal element to it. If you tweet about it about and they find out, they can either fire you or make things extremely uncomfortable for you while at work. Think larger workload, being passed over for a promotion or raise, or even being demoted. Even if they are not allowed to use your tweets as a reason, they will come up with one.

Twitter can be a powerful tool, but it can also cost you your job if you are not careful enough. You are entitled to have your own Twitter account, and what you post on it should never be held against you. But in reality, it might be. So, do yourself a favor and be more careful, or at least make sure to study the privacy settings carefully. Good luck!

About the Author Jessy Lee

Jessy Lee is a headhunter for 2 years. She is always ready to share her experience with job seekers and young workers. Feel free to contact her to find out more: Twitter.