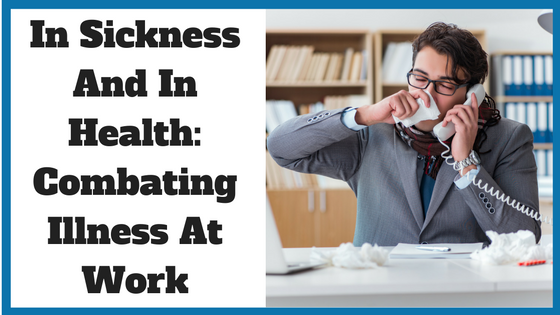 In Sickness And In Health: Combating Illness At Work

It’s a classic story. You wake up, raring to go, on a Monday morning – to find your throat like a desert and your nose running faster than Niagara Falls. Should you be struggling in anyway?

Whether it’s the common cold, depression or a long-term disability, here are a few pointers on dealing with illness at work.

If you believe AXA PPP Healthcare, nearly a third of bosses prefer employees to take sick days rather than come in to the office. The reasons are obvious; going into work sick can have a serious effect on productivity, not to mention on others, as you spread your contagion all over the office. Better to stay home, self-quarantine and get better quick than struggle through and infect your entire office.

Still, taking those days can be difficult–particularly in certain US states, where employers aren’t required to offer paid sick leave. Maybe that’s why American workers are famously reluctant to admit to illness – not least Hillary Clinton in the case of her pneumonia.

If your workplace doesn’t offer paid sick days as part of its benefits package, there’s no win here. The only realistic advice is to go in if you feel capable and don’t if don’t.

If you’re in a relatively senior position and feel able to, try approaching your boss about the issue. Show them evidence of your position – the internet is full of it – and see if they’ll consider implementing a more lenient sick leave policy. Otherwise, you may just have to suck it up until your state gets its act together.

Mental illness costs the US 200 million workdays annually – and that’s just depression. Such invisible health issues are the epidemic of the English-speaking work; according to CV Library, over a third of UK workers suffer from the illness, of whom two in five feel judged for their condition.

Most tellingly, many mental illness sufferers seem reluctant to speak out at work. A 2015 study showed that almost four in 10 workers wouldn’t tell their manager if they suffered from a mental health problem. It’s unfortunate considering half of respondents reported that, if they knew that a co-worker was a sufferer, they would want to help.

Whether you tell your boss about your problems is up to you; it’s no secret that mental health issues still carry a ton of stigma that may render communication more harmful than beneficial. If you’re confident they won’t understand, don’t bother.

Instead, UK charity Mind recommends talking to someone who isn’t your manager, taking full lunch breaks and speaking out about unmanageable workloads. If it all gets too much, take some sick leave. Mental illness is as debilitating as any physical condition. You’re doing yourself and your workplace a favor by speeding your own recovery.

Long-term illnesses, particularly ‘invisible’ ones like chronic fatigue, can cause a lot of headaches at work. You can’t take all the time off you need, because it’s seemingly endless. But you can’t quit your job, either.

Three years ago, Cecelia Stroessner-Clark discovered that she had autonomic small fibre neuropathy and fibromyalgia – a debilitating illness that affected her for two and a half years before her final diagnosis. Her advice to sufferers? Ask work for help.

“I reached out to my HR department first. I let them know I was having some issues and worked out some accommodations: sneakers instead of office shoes, new equipment, etc,” writes Stroessner-Clark. “[Later] I sat down with my manager and only gave her the highlights of what was going on.”

Most organizations will be willing to make concessions when they understand that the alternative is reduced productivity and loss of manpower.

Workplace discrimination on the grounds of disability is illegal, but that doesn’t stop it happening. In a recent case in the UK, 51-year-old Merseyside resident Andy Davies was sacked from his £100k job following a diagnosis of multiple sclerosis. Justice was eventually done; he won an unfair dismissal case against his ex-bosses.

Still, the figures from the English-speaking world aren’t encouraging. In the US, fewer than a fifth of disabled workers are employed. Research from PMI Health Group shows that almost 40% of UK workers believe disability is an obstacle for career progression. The same survey found that one in five employees believe their employers make inadequate provision for disabled colleagues.

When working from home is not an option, disabled workers should be aware of what they can request of employers. For example, those whose conditions can over-tire or limit mobility should not be afraid to ask for permission to telecommute. With so much emphasis placed these days on flexible working and so many laws protecting disabled workers from discrimination, your bosses would be foolish to discount the request.

Some employers, like Lloyds Banking Group, make deliberate provision for disabled employees. Others must be pushed. Whatever you do, don’t despair; there are plenty of examples of successful business people who worked through disability to get there.

In a job interview, a disability might even work to your advantage. Learn not only to acknowledge the drawbacks of your situation, but the pluses. Disabled people are often better at solving problems, looking at things differently and empathizing with others. Show what you can offer that others can’t.

Whether you’re struggling with mobility issues or a virulent bout of norovirus, illness can be a polarizing subject. At the end of the day, you can’t be forced to work if you don’t feel well enough. If your employer tries to do so, seriously consider your options; it may be time to seek greener pastures.

About the Author S

The author has asked to remain anonymous.