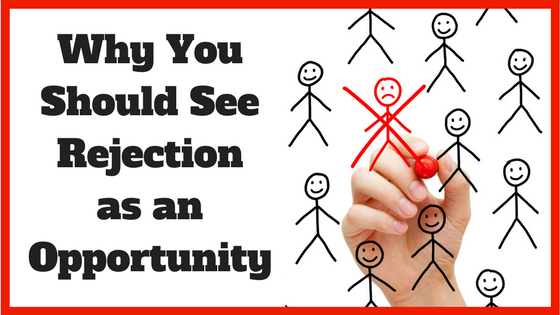 Why You Should See Rejection as an Opportunity

So, you didn’t get the job.

Hopefully, you already know that this isn’t the end of the world. Just in case you don’t – it isn’t. In fact, there’s a possibility that you’ll be able to get something really positive out of this otherwise dispiriting experience: Feedback, which you can then use to ace your next interview.

Here’s how to ask for it.

Some employers will provide interview feedback as a matter of course, but plenty don’t. A lot of the time, if you want feedback, you’re going to have to ask.

Requesting feedback can be daunting. A common concern is that the interviewer you will be contacting has far better things to do than help you out for nothing in return. It’s true that they may well be too busy to give you a detailed response (or any response, for that matter). Company policy might even prevent them from doing so.

Still, it certainly doesn’t hurt to ask. If your interviewer doesn’t have the time to help, or can’t, they’ll simply say so or not reply. If your request is a polite one, they’ll have no reason to be rude about it. Obviously, demands are not going to be met with anything but irritation.

Going back to company policy, it’s a good idea to re-examine the job advert and any letters or emails you received from the company or recruitment agency during the hiring process. These may state that interview feedback will not be given – in which case, there’s no point requesting it.

Be polite and to the point

How should you phrase your request? Whether you’re making it by phone, email or in person, start by saying you enjoyed the interview. Just a brief statement to this effect is enough. You want to pave the way for your request, but you don’t want to take up too much of your interviewer’s time either.

Follow your opening with something along the lines of, “I’m keen to learn as much as I can from the experience and would be very grateful for any feedback you’d be able to give me.” Try to avoid calling attention to the fact that you were rejected for the job. You both know that you were, but stating it can make the exchange feel a little awkward.

Also avoid phrases like “I want to know what I did wrong” and any indication of the disappointment you felt when you learned you hadn’t been successful. Such comments can come across as a bit of a guilt trip and your interviewer may even (mistakenly) detect a whiff of accusation – so it’s best to steer clear.

Provide your interviewer with a framework

While you don’t want to dictate your interviewer’s answers, asking for feedback on particular areas of the interview can be a good idea, especially when the conversation is taking place face-to-face or via phone.

Supplying your interviewer with a ready made structure for their response makes it easier and less time-consuming for them to marshal their thoughts and so increases the chances of you getting something useful back from them.

It’s often the case that you’ll have an idea of one or two things that might have worked against you in the interview. Think about which areas you might have fallen short in and ask about those areas.

For example, if you feel you failed to adequately explain why you didn’t seek a promotion in your previous job, ask your interviewer how they thought you handled questions about your work history.

…but not a rigid one

The template you give your interviewer shouldn’t be too restrictive, as this might mean you don’t receive feedback on a misstep you weren’t aware you made. It’s useful to have a suspicion confirmed, but it’s even more useful to have something you were previously oblivious of brought to your attention.

After all, how can you work on something when you don’t even know it’s an issue? To avoid potentially losing out on valuable information, add a sentence inviting your interviewer to give their thoughts on anything outside the areas you’ve mentioned.

Getting feedback after a rejection is never going to be a pleasant experience, but try to be receptive to what your interviewer flags up. This is an opportunity to improve.

Sometimes your interviewer won’t include in their response what you did right. If that happens, don’t assume that everything you did was wrong; the interviewer’s probably just pressed for time.

Particularly helpful interviewers might give you some suggestions on how to address the issues they’ve identified, but you shouldn’t expect this. It’s up to you to figure out how you’re going to ensure you don’t make the same mistakes in future.

Still, it shouldn’t be too hard! You must be a pretty capable and hardworking person or you wouldn’t have got an interview in the first place.

When you lose out on a job, it can make you feel around two inches tall, but the fact is, we’ve all been there. Every interview is just a practice run for the one that does lead to a job. Rejection isn’t fun, but it can serve a function.

Thinking of hiring a career coach to help you brush up on your interview skills and land your dream job? Browse our directory of career coaches and get a FREE consultation or request a personalized coach recommendation!