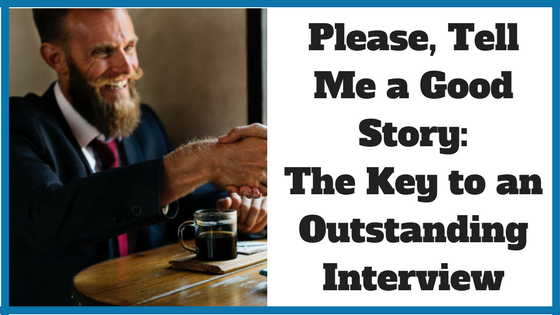 Please Tell Me a Good Story: The Key to an Outstanding Interview

“The engineers of the future will be poets.” –Terence McKenna

I am always surprised when working with clients on interview prep – especially when working on “the tell me about yourself” question and answer. Usually, an inexperienced and under-practiced interviewee will respond with, “Well, where shall I begin?”

If you, as a job seeker have EVER heard the phrase, “Well, where shall I begin?” come out of your mouth, then listen up! You have just blown the interview.

You think I sound harsh? No, in fact most interviewers agree that if the interviewee doesn’t understand that he or she is in a job interview and it’s imperative to start out confidently and competently talking about your work, those who blurt out a confused sounding “Well, where shall I begin?” have just shot themselves in the foot. Since this is a typical lead into a major interview answer and part of cementing that first impression, you might not recover during the rest of the interview.

Why your “tell me about yourself” answer is so important

When you are asked to “tell me about yourself” in a job interview, I suggest that you have something engaging and witty prepared that will bring your listener along. From the primitive beginnings of humankind, we have shared information with other humans in the form of a story. Renowned cultural anthropologist Mary Catherine Bateson said, “The human species thinks in metaphors and learns through stories.”

An aspiring employee should be helping the interviewer (or the interview panel) to learn more about him or her through the vehicle of story. If you want to get hired, the stories you tell in an interview need to be memorable and so impactful that the interviewer(s) can’t help but relate to how much they need you in their company to help solve significant problems.

I usually suggest that the tell me about yourself answer needs to have a good hook. The interviewee needs to start out with some tale which creates intrigue and interest in the listener.

“Tell me and I forget. Teach me and I remember. Involve me and I learn.” –Benjamin Franklin

“Oh my gosh (said with obvious enthusiasm)! I have had such a great career to this point. It was when I was working with X-Corp, that I hit my stride. As a kid, I was one of those who dreamed of being an astronaut – did you? I was always fascinated by all things in the sky. As you know from my resume, I studied aerospace engineering in college and even had an internship in that area, but my first jobs after college did not focus on aerospace but on finishes or coatings for things on the ground which were going to be exposed to extreme heat – heat shields for fire equipment.

For the first five years of my work, I was on project teams perfecting coatings to be used in high-intensity fires like petrochemical ones. However, once, I arrived at X-Corp, I finally had a chance to dream again about sending rockets to the moon! By that I mean, I spent several years again focused on the study of heat shields and led a team of five with a budget of $X doing leading-edge fire retardant curtain wall system research. As you may know, later our breakthrough coatings work contributed to the successful launch of the rocket supporting the International Space Station.

What an honour, the International Space Station (ISS) is the most complex international scientific and engineering projects in history, and the largest structure humans have ever put into space. While I’ve found my time working at X-Corp engaging and know we’ve done great work, I have to admit to being intrigued by this opportunity now with your company, Y-Corp, and think that for the next phase of my career I might be able to contribute significantly here and to offer this company the benefit of my lifelong interest in this area. I welcome hearing some details from you about what you see as the greatest challenges facing the person who steps into this position. What can you share with me?”

“Well, where shall I start? As you can see I was born in Missouri and ended up attending college at the University of Missouri where I studied engineering and after went to work at Z-Corp upon graduation. I spent several years testing heat shields for fires – especially scorching fires like petrochemical ones. I liked that work, but a few years back, a buddy from graduate school called and asked me to check out X-Corp. At that point I made a change going to X-Corp and as you know worked on a high profile project – the International Space Station. So, I have been leading a team of five with a budget of $X. However, as you know, funds have been cut back. So, now I am here talking with you. Is there anything else you would like to know?”

Which one of the responses engages the listener in the best story? What makes a story good? What makes someone want to listen really?

The KISS principle may ring a bell from your childhood. It stands for, “keep it simple, stupid” or “keep it short and simple.” Whichever you prefer, it basically means that it’s better to keep things straightforward and easy to understand. Use language or acronyms that are familiar to your listener and which allow the audience to follow without asking, “I wonder what that means?”

Using alliteration (using the same letters or sounds at the beginning of closely connected words) or other creative word choices help. We tend to like word combinations which inevitably seem to rhyme.

2. Hook into a feeling

The best stories play on how they make us feel. Creating a feeling in your listener means that the topic resonates somehow. While interviews are not the most emotionally charged situations, those who bring enthusiasm and emotional grit to the conversation create a lasting impression. Most great interviews and stories have humour, pain or joy (sometimes all three). If every story were simply facts stated, one after another, most of us would not listen or remember any of it. So, create colour in your interview conversation by bringing your listener along.

Puffing is when we exaggerate. When we tell interview stories, we are not seeking truth in the scientific sense with reference citations and footnotes, but where objective facts stated. Interviewers want to clearly observe the storyteller believing what’s said; resulting in a story perceived as credible, and the speaker recognized as honest with him or herself and with the audience.

The more numbers and comparisons used helps the listener find the information to be more real and credible. We are attracted to numbers to evaluate because we view them as objective and we like comparisons such as increased, decreased, improved, enhanced, etc… which tells the listener that the teller has added value to the project or situation which likely enhanced productivity, efficiency or profitability (PEP). I invite my clients to think in terms of objectively articulated PEP statements.

Good stories relate first-hand experiences the interviewee witnessed in which s/he participated. Even if it might be a story that’s passed on from one speaker to another, an effective story still has an element of how that story relates directly to the teller and is told in the teller’s own words.

Regardless of the audience size, a good story works for any audience. One to one-million. It is not concerned with how many people can hear it, just that someone, somewhere is listening to it. The good work story is engaging and has elements which allow the teller to move through the beginning, to the middle and ultimately to end with the thoughts pulled together for the listener validating the discussion topic. At least for stories told in the context of an interview, we want to complete the thought process on behalf of the listener rather than to leave them hanging and have them create their own ending. We want our story lines to be tied up neatly in a way that ‘leans into’ our intention for a successful interview.

The secret to answering a good ‘tell me about yourself’ is anticipating the question and preparing an interesting and colourful answer that involves the listener/interviewer and truly showcases the best of you – the interviewee.  Good luck.

Thinking of hiring a career coach to help you get the career of your dreams? Connect with Lynden Kidd, browse our directory of career coaches and get a FREE consultation or request a personalized coach recommendation!

About the Author Lynden Kidd

Lynden Kidd is the CEO and Chief Career Strategist with Captivating Careers. A successful and sought after executive coach, trainer, author, and speaker, she is a hiring process expert. As an accomplished career consultant, Lynden has interviewed thousands of job seekers, led more than 300 career development training sessions serving 500+ job seekers resulting in employment and enhanced job performance for hundreds of professionals.