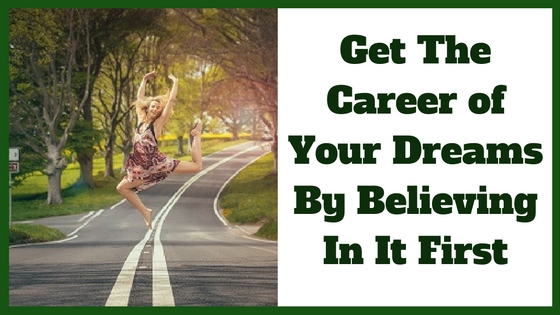 Get The Career of Your Dreams By Believing In It First

“Never stop dreaming” is a cliché that most of us are simply too tired of hearing to take seriously, but it’s also a principle that many successful people credit for their ability to develop the careers of their dreams. So what’s the secret behind the phrase? Is there some mystical code that only some people are able to decipher? Is it really a practicable lesson to take from successful people when making important career choices?

Looking back on myself as a young girl dreaming about what I wanted to be in the future, I didn’t ask myself questions like the ones above, I just knew I had to keep dreaming because one day it was going to pay off—and I’m glad I did! When we are children, it’s almost as though we instinctively understand the power of belief without having to question it. So what is it about adulthood that makes us forsake even our most precious of dreams and instead settle for jobs that we do simply to pay the bills?

From dream to “reality check” – Is your dream career really beyond your reach?

We all start out in the job market with dreams, so can you remember the last time you thought about your dream career? Not just a “job” or the career everyone said you should go for or the one that seems most convenient, but your DREAM career. What was it that made you either put your dream career on the back burner or even forget about it all together?

For many people, dreams are crushed by the harsh “reality checks” offered by well-meaning (but often misguided) friends, family or colleagues. Have you ever been told to “get your head out of the clouds” or to stop dreaming and get a “real” job?  Many people learn to believe these phrases and can only fight for the right to dream for so long, eventually giving in to the financial/societal/family pressures. Slowly they start to think about their dream careers less and less until they’re either so disconnected from their dreams that they can barely remember them, or feel too trapped in jobs they hate to do anything about their dreams.

What if I told you that these dream-crushing “reality checks” don’t have to have anything to do with your reality at all and that the only way to achieve your dreams is to stop accepting these “checks” as facts? Behind every successful person in every sphere of life, there isn’t only a dream, but a ton of failure, negativity, rejection and even ridicule that had to be overcome. What distinguishes the successful from the rest isn’t that they were the only people with dreams, but that they were the only people who kept their dreams alive in the face of adversity.

Having belief in your ability to achieve your dream career won’t magically make it materialize, but it’s the first step in getting yourself to actually do something about it. In the words of David J. Schwartz, “belief triggers the power to do.” After all, nobody is willing to work towards a career that they don’t think they’ll be able to achieve—what would be the point?!

For example, if you didn’t believe you had a good chance of landing an important promotion at work, you wouldn’t see any point in working harder to get it. Self-doubt and procrastination can make even the most competent of professionals reluctant to make any real effort and this, in turn, can lead to a spiral of self-fulfilling prophesies.

Is your dream career worth the effort? Or do you have doubts that the hard work required is going to pay off? Nobody said achieving your dreams was going to be easy or even that every effort made would result in immediately obvious rewards. Only those who truly believe in their dreams are able to roll with the punches when things get touch and to find the inner motivation to see the world of possibilities available to them.

How does your current career differ from your dream career?

Your career is one of those spheres in life where the saying “seeing is believing” simply does not apply. Do you really think people like Steve Jobs or even Oprah would have worked as hard as they did if they didn’t believe that they could achieve their goals? No matter what your life looks like now, it’s never too late to steer your current career path closer towards your dream career – you simply have to have enough belief in your dream to be willing to make the change!

About the Author Kirstin O'Donovan

Kirstin O'Donovan is a "multinational" productivity coach, author and founder of TopResultsCoaching, an international company providing coaching services in nearly a dozen countries. With over 10 years working in the field of coaching and personal development, she provides her expertise to help individuals create the life and results they desire. She works closely with individuals who struggle with time-management and organization to achieve their goals successfully and take their life to the next level.