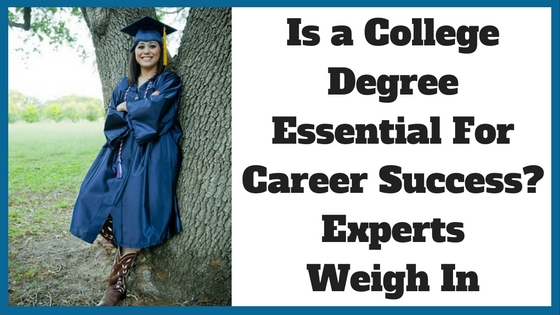 Is a College Degree Essential For Career Success? Experts Weigh In

There has been much debate in recent years about whether or not you need a college degree in order to be successful in your professional life. Gone are the days when a high school education made the cut. Now about 36% of workers have a bachelor degree or higher compared to 34% with a high school diploma or less, according to a study by Georgetown University’s Center for Education and the Workforce.

While the economic crisis is now over, the wage crisis persists. Many people feel that the labor market is polarizing—meaning high-paying opportunities are going to a select few while low-wage jobs are rapidly increasing and middle-wage jobs are disappearing.

A recent study put out by Indeed confirms this fear, with only 18% of the current labor market defying this trend. According to the US Census Bureau (2015), incomes in the US have been stagnant for three consecutive years, following two years of big declines.

In the study, Indeed filtered out what it considered to be “opportunity jobs”—salaries that have grown faster than inflation in the last decade and have an average salary higher than $67,700 (as of 2014)—and found that only 16% of 2014 total employment fit into this category.

“If you want a career path that is leading to high incomes and raises year after year, which psychologically really matters to people, that overwhelmingly requires a college degree,” said Tara Sinclair, the chief economist at Indeed and the author of the report.

However, the study also says that opportunity means different things to different people. With that in mind, we decided to speak with some experts, explore this topic and really find out if a college degree is essential for career success.

According to the report, 90% of Indeed’s opportunity jobs fall under five sectors which include health care, computer and mathematical, architecture and engineering, all of which often require specialized degrees. This means that it’s not just a college degree you need, specialized training and skills in specific fields is often needed to acquire these jobs.

“A college degree alone doesn’t buy you access to an opportunity job,” Sinclair said. “These jobs are in a narrow set of industries and in general you need specialized skills. Just a general college degree won’t get you there.”

What’s more, there are plenty of jobs that typically require a college degree that don’t make the cut for opportunity jobs, such as graphic designers and insurance sales agents.

Not everyone wants an “opportunity job”

Another argument is that not everyone wants or is suited for these opportunity jobs. While some of us may measure our professional success by the amount of money we make or the perks that come with the job, others are focused on more meaningful careers that may not offer up the same financial benefits.

“Not everyone wants or is suited to the so-called “opportunity jobs” and we do a disservice in funneling students into these areas (think STEAM versus STEM),” said career coach Sally Anne Giedrys. “We need the graphic designers, artists, insurance sales people, police and firefighters, mechanics, writers, electricians and teachers just as much as we need IT and healthcare workers. And it’s well proven that well-being rises when we are doing work we find fulfilling and that offers opportunity to use our individual strengths.”

“Making the most money is not the end goal for everyone. Passions, strengths and talents matter, too. Lifestyle priorities matter. Fulfillment matters. And it’s not the only ‘outcome of their education’ that students should be measuring. Obtaining a well-rounded education that will serve you as a citizen of today’s world and provide you with options is just as, if not more, important,” she added.

If you are interested in pursuing your lower-paying passion, don’t let the data discourage you, Jeff Strohl, director of research at Georgetown University’s Center for Education and the Workforce told MarketWatch. “Instead, they should be cognizant of their earnings prospects and do what they can to minimize their debt load so that it will be manageable on a relatively low salary, he said. He noted that students compare phone plans so they “might as well compare the outcomes of their education.”

What’s more, there are a ton of high paying jobs that only require a two-year associate degree or even just a high school diploma, such as real estate agents, boilermakers and claim adjusters.

College is expensive and doesn’t guarantee anything

It’s no secret that post-secondary education is expensive and costs are continuing to rise, meaning not all of us can afford to attend college and earn a degree. Indeed’s research indicates that obtaining a college degree isn’t a guarantee of financial success, so it’s important to evaluate your individual situation and understand the risks associated with going to college.

“In my experience, you need to balance the financial costs against the education being obtained. Yes, employers claim they want college degrees, but this may change over time. My advice at this point would be to get the college degree, but don’t overspend – its not worth it!” said JT O’Donnell, career expert and CEO of CAREEREALISM.

“A college degree does not guarantee you any job unless you pursue it. Today, the job market is extremely competitive and the pool for higher skilled jobs often consists of college grads and those with even higher credentials such as MBAs and PhDs. I think today, you have to look at a college degree as a starting point, but certainly not the end point,” said Wendi Weiner, attorney, Forbes Career Coach and owner of The Writing Guru.

Another group that wasn’t taken into consideration in these studies were the entrepreneurs and solopreneurs. While the recession caused a lag in entrepreneurial growth for a few years, startups in the US have been making comeback. In fact, according to the 2016 Kauffman Index of Startup Activity, startup activity rose for the second year in a row, with the rate of new entrepreneurs increasing by more than 15% from two years ago.

“The Startup Activity Index rose to 0.38 in 2016—continuing an upward trend started in 2015. After falling with the recession and reaching its lowest point in the last twenty years just two years ago, startup activity rebounded, going up for the second year in a row,” the report stated.

“Plenty of opportunity exists for smart, motivated entrepreneurs and solopreneurs to make their own game in today’s new world of work. And if you’re doing that, a specific degree isn’t necessarily going to be needed to open the doors,” said Sally Anne. However, she added that a well-rounded education is always going to help, not hinder, you.

“I perceive, as does the world, entrepreneurs as being a special set of persons who are most often, self-driven and self-taught. A college degree may not help you in being an entrepreneur but a willingness to advance your skills and self-determination will bring forth the career success.” Wendi added.

Opportunity in the tech industry continues to grow

Then there is the technology industry, which is a major driver of innovation and economic growth in North America and has been growing rapidly in recent years. In fact, the US tech industry added nearly 200,000 jobs in 2015, meaning it now employs over 6.7 million people.

“The U.S. tech industry is a major driving force in the overall economy, accounting for 7.1 percent of overall GDP and 11.6 percent of total private sector payroll,” Todd Thibodeaux, president and CEO, CompTIA said in a press release. “The tremendous level of ongoing innovation in the industry, making technology more affordable and accessible to more users, has us encouraged about growth prospects for 2016 and beyond.”

The Canadian tech sector employs 864,000 Canadians, 5.6 % of Canada’s total employment, with the average salary sitting at $67,00 per year. The report noted that over 50% of tech sector employees had a university education, compared to 29% across Canada’s labor force.

However, there are still plenty of jobs in the field that don’t require a degree. Computer user support specialists, junior data analysts, digital marketers and web developers are just a few high-paying tech jobs available without a college degree, according to data compiled by Forbes contributor Laurence Bradford.

So, is a college degree essential for career success? In the end it really depends on your career goals and how you measure your success. But it is safe to say education is a great asset and a college degree can help build your professional profile and act as a means to measure your aptitude.

“As someone who has a JD and who left practicing law to pursue an entrepreneurial venture, I still believe in the power of further education as essential to career success,” Wendi Weiner said. “The way I was taught to analyze an issue in law school and real-life practical aspects of being a lawyer (and serving in the trenches of litigation) has helped me tremendously in rising to the top as a career expert and receiving the rank of #1 resume writer. My professional success has been formulated in large part by my educational background. I firmly believe further education is the way to advance your skills, advance your knowledge, and those two elements help fuse greater professional success. I think we can all agree that there are many successful business people (Bill Gates, Mark Zuckenberg, etc) who did not complete college and the lack thereof did not derail their success. However, from a personal standpoint, I believe that a college degree or anything higher than that gives you leverage to obtain more money. It equips you with certain skills and a certain mindset for having a competitive advantage.”

Need help deciding on a college major or have you graduated and aren’t able to land a job in your field? A career coach can help! Browse our directory of career coaches and get a FREE consultation or request a personalized coach recommendation!