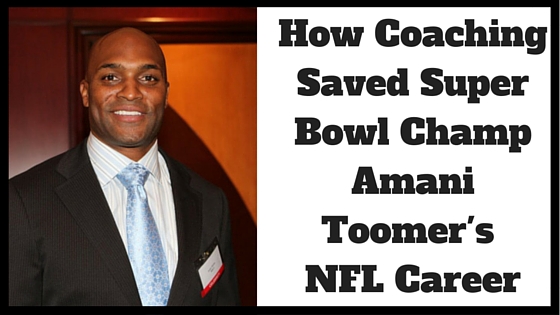 Being drafted into the National Football League is like a dream come true for any college football player, but it also means a lot of pressure—especially at the ripe young age of 21.

After playing college football at the University of Michigan from 1992 to 1995, Amani Toomer was selected to play for the New York Giants during the 1996 NFL Draft and despite this being every footballer’s dream, he got off to a rough start.

So, when his teammate Howard Cross suggested he come along to a Shaolin Kung Fu studio in New York, Amani decided he should give it a try. That’s where he met coach Sifu Karl Romain. At the time Amani wasn’t even looking to get a coach, just some exercise to alleviate his boredom.

“This was back in the 90s when Kung Fu flicks were really big. I always wanted to do it and I felt like it was a good time to do it because I wasn’t playing much and I thought it might spark something in me and it absolutely did,” he said.

That first class really put his ego in check and started him on a journey of self-discovery that he believes saved his career.

“I remember the first day I was in it, thinking, ‘This is really hard.’ I was 22 and thought there was nothing athletically that I couldn’t do. And then I held my hands out for a couple minutes in a horse stance and thought, ‘This is the hardest thing I have ever done. What’s going on here? I thought I was in shape!” he laughed. “The realization that maybe I can’t do everything athletically, it really humbled me to the point where it opened my mind to everything. Maybe I didn’t know everything about football, maybe I needed to learn more about the game, maybe I needed to work on my technique.”

After realizing this new challenge would be good for him, Amani began attending classes regularly and developed a friendship with Karl. That’s when he began to confide in him and talked with him about the difficulties he was facing and the pressures of playing in the NFL.

“I started telling him about what was going on with football and how I was being treated and he kind of flipped it on me. He said, ‘They are treating you bad and you aren’t getting what you want to, but look at it from their perspective, what are they not getting out of you?’ and that’s when I started looking at it through not just my perspective, but everyone else on the team,” he said. “It helped me get out of my way and think about the big picture. How good of a teammate was I being? How good was I working with other people?”

Amani soon realized that just because he was a talented player didn’t mean the coach was obligated to put him in the game, but that he had to earn it and show that he cared about what he was doing. He said that this realization finally allowed him to get in good standing with the coaches and was the point where his professional career really started.

Practicing Kung Fu with Karl also helped Amani build up his physical endurance and in particular, his breathing. “I had exercise-induced asthma so my endurance wasn’t really good. The way that the 40-second clock goes in the NFL, the game is a lot faster than in college and high school. It was weird, playing sports all my life I never really needed to worry about breathing because I was in really good shape,” he explained.

Then there was the mental focus involved. Working with Karl helped him really focus his mind and deal with emotional triggers both on and off the field.

“There is so much more that goes into a pro game than any other game – It’s not just physical, it’s mental. All of the exercises we did really helped me focus my mind and compete on a much higher level. I ended up starting from 1999 to 2008, so I was a starter for the next 10 years. I ended up having a really good career, a lot of which had to do with the foundation I built with Karl. The coaching to me was invaluable.”

Besides dealing with the mental pressure that comes along with playing in the NFL, Amani was coming back from knee surgery when the NY Giant’s signed their new coach, Jim Fassel.

“He didn’t really see the talent with me as much as the other coach did. It was hard for me to get onto the field and out of the doghouse. He didn’t know me from Adam, he just knew that I was hurt and I came back and wasn’t that good,” Amani said.

When NY Giants continued to draft players in his position, starting with Ike Hilliard, it became evident to Amani that he had to change his mindset and his approach to prove he wasn’t dispensable.

“They drafted guys in my position for four years in a row. How do you mentally not get mad and go into a shell and still perform at a high level and prove them wrong? It’s just sports, but sometimes you have to change their perspective on things to get out on the field. A lot of that had to do with the help that Karl gave me off the field to get my mind right to be able to show the talent I felt I already had on the field,” Amani said.

“My first year with Karl, I was a borderline player. I remember I went to coach Fassel and I was really frustrated, I hated going to work, I just didn’t enjoy being in the NFL,” he admitted. “A lot of it had to do with the fact that they just didn’t believe in me and they didn’t think that I was working hard, when I was. There were a lot of situations where Karl steered my mind in a different direction and helped me get over certain situations where it looked like they were trying to get rid of me. I think that was one of the reasons I stayed with the Giants for so long.”

Over the years, having Karl as a mentor helped Amani become a better communicator and allowed his relationship with the next NY Giants coach, Tom Coughlin, to stay in good standing. “I never really had anything against him, but there were so many people taking shots at him in 2005 when he first got there, that I didn’t want to pile on. And when I did pile on mistakenly, I didn’t mean to be one of those guys that he thought was against him.”

After a reporter misconstrued Amani’s words for a news article, it was evident he had to do something to mend the bridge. “I talked to Karl about it and he said, ‘Amani, go into his office, talk to him and make sure that he knows that you’re on his side.”

“Going to talk to him that day really opened up a line of communication that we didn’t have. That line of communication helped me stay around a long time and it helped him believe that I wasn’t trying to get him fired. A lot of those people that were against him ended up missing out on the chance to go to the Super Bowl in 2007 and winning. I think a lot of the reason why I was able to stay on that team for so long was, first of all, I could play well, but that I kept open the lines of communication.”

“In sports, you feel like you don’t have to talk to anybody, you just have to do your job. Well that’s all well and good to a point, but it’s a people business. If you get along with coaches and you perform well, there is no need for them to look to replace you. And that’s why I was able to stay around for so long. I was performing at a high level, I wasn’t causing a problem and they felt that I was part of the solution instead of the problem.”

“One of the things that he told me that I’ll never forget is, the difference between good and great are the little things.”

Besides figuring out how to deal with the press and the coaches, Amani also had to learn how to deal with frustrations with teammates. “There are a lot of guys that are talented that mentally can’t hack it. Karl helped me navigate that minefield of the mental pitfalls of the NFL.”

“In any job, there are things that get under your skin and you really have to focus on not getting sidetracked and letting someone else affect your mood or your focus,” he explained. “Karl told me, ‘You can’t let these things bother you, you have to focus on what’s important’. There are countless examples of those little things that he helped me get through. He kept bringing me back to the big picture. He helped me focus on the minor details of football and the minor details of my life. Most of the things he helped me with that without him I don’t think I would’ve figured these things out on my own.”

Having Karl in his corner meant Amani was able to see the value in pushing himself to the limit.

“He told me to do these things, work hard, try to make sure that you are putting forth the effort and doing everything you can. Because if things didn’t work out, at least I know I tried my best,” Amani said. “There is no shame in saying you just weren’t good enough to play in the NFL. At least you’ll know you tried your best and you just weren’t good enough. The shame in failure is if you think, ‘Man, I wish I worked a little bit harder when I was playing.’ That’s the real shame of it. At the end of the day you want to know you tried your best, you did your best and there was nothing more I could’ve done.”

Amani admitted that it wasn’t easy to push himself to the limit of his playing ability and risk failing, but that realization and drive was what made him one of the best wide receivers the NY Giants has ever had.