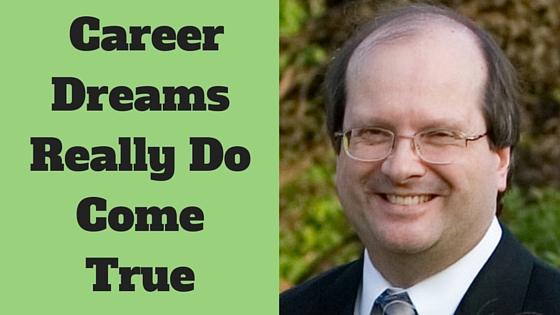 After years spent traveling overseas with his company, Jeff Purdue was ready for a change. As one of three founders of ITSqc LLC, a process-improvement consulting firm, he was required to spend a lot of time away from his home in Pittsburgh.

“We were spending a lot of time in South America and Europe and getting many inquiries from Asia. And I was just at the point in my career when being on airplanes all the time and away from my wife wasn’t where I wanted to be,” Jeff explained.

Jeff knew he needed to make a career transition and, being a consultant, he understood that sometimes expert advice is necessary to achieve your goals.

“I have bought the books before. I’m a computer scientist, so for us everything is an algorithm. You can just read it and follow the steps and do it. But I have tried this before and I know there are certain steps where I hesitate. Because I am an introvert, I’m not naturally gregarious or willing to just go out there and assert myself when it comes to certain parts of the process, like asking for an interview or asking for a job,” he said. “What I really wanted to do is find the job I REALLY wanted to do, not just gravitate to the next thing that I could find. So, I wanted to be more intentional and I knew I wasn’t going to do it by myself.”

So, he did what any tech guy would do, he Googled it.

“So I Googled career counselor Pittsburgh and Noomii came up. There was a picture and a description of [career coach] Curtis Songer and when I read the description I realized his background was like mine. When I saw his profile and qualifications, I thought he sounded like a guy that will do things like I want. He has a process. I respect people that have a process and can implement it. So I gave it a try!”

Right away, it was evident to Jeff that he had found a perfect match with Curtis and because he still had his own company and a source of income, there wasn’t a huge sense of urgency to find a new career right away. Curtis put together a proposal that would have the pair working through his five-step process together over six months.

What I really wanted to do is find the job I REALLY wanted to do, not just gravitate to the next thing that I could find. So, I wanted to be more intentional and I knew I wasn’t going to do it by myself

“When we started he gave me this proposal that says we are going to go through these steps and do this stuff and then we did! We met at Starbucks and had these one-hour sessions and I would have homework and then come back with it the next week,” Jeff explained. “He would take care of me but he wouldn’t let me slack. He knew what he was doing and he went through this process and it produced results.”

Although Jeff always dreamed of teaching computer science to college students, whenever the idea of him actually taking on a career as a professor, he found the idea a little distressing.

“To some degree I found it distressing because this is something I have wanted to do my whole career; teach college students. But I realized this wasn’t going to happen because I didn’t have a PhD. So we kept doing things and having dialogue.”

While the pair worked through different scenarios and job options, an opportunity arose for Jeff to interview for his dream role at the college Curtis taught.

“He gave me the opportunity to actually interview at his college. Even though we both knew it was a long shot,” Jeff said. “I interviewed with the lady and I think I scared her with my excitement. I walked out of the interview thinking, I know how to do this. This is a good job for me and I was just so energized. And I knew it was something I needed to focus on. It woke me up, it made me think about it more seriously.”

I walked out of the interview thinking, I know how to do this. This is a good job for me and I was just so energized. And I knew it was something I needed to focus on. It woke me up, it made me think about it more seriously.

“I decided this is what I really wanted to do after I did that trial interview at the college where Curtis works. Even before we were completely done, he said, this is just a targetive opportunity, we may not do anything with this, but try it. So these professor jobs were always part of the analysis, although a small part because I knew the possibility was low. As we kept moving through the process, the possibility of doing this grew more and more.”

With his dream career now at the forefront of his mind, Jeff continued to work with Curtis to develop both an academic and commercial resume.

“Curtis has good resources to take the raw input you give him and turn it into a good design; that is just one of the things he could do. He fixed it up and put key points into it after asking key questions so your resume pitches to the current market,” he said. “He has an amazing set of resources, like professional networking and recruiter contacts, which he has a ton of, and he talks to you about how to get those. ”

One day Jeff was faced with the opportunity of a lifetime when he came across a posting for a visiting professor of computer science position at La Roche College in Pittsburgh.

“I showed it to Curtis and said, ‘Look at this, this is me!’ and he read it over and then said, “Yeah! Get an interview there!” Jeff recalled. “I thought, ‘Whoa, wait a minute.’ Now I’m scared because this is the one I really want and I don’t want it to get away, so I want to be very cool and methodical.”

But Curtis was adamant that Jeff had to get in touch with them as soon as possible and told him to ‘call them or send an email RIGHT NOW.’

He has an amazing set of resources, like professional networking and recruiter contacts, which he has a ton of, and he talks to you about how to get those.

“And that’s the thing I wouldn’t have done. That is where I would’ve fallen apart,” Jeff admitted. “Right when it was time to go out and approach the individual and say ‘Hi, here is my resume. How is next Friday? I’ll be in the area.”

So Jeff took the plunge and sent an email to the college with his resume,  letting them know he would  ‘be in the area.’ And sure enough, it worked! Which meant it was time to begin preparing for the interview.

“Curtis had all these guidelines. We did interview prep; questions people might ask during the process. I hadn’t interviewed with anybody since 2002. So it was somewhat terrifying, and I thought maybe I can’t do this anymore, maybe I was too old for this. He helped me be ready and confident that I would be okay in the interview. All I had to do was go in and be myself but keep in mind the things that he talked to me about and it worked.”

Whatever Jeff did in his interview clearly stood out to the interviewer at La Roche because he was quickly hired as a visiting professor for a one-year contract.

It is a job where everyday when I get up and I go there, I don’t consider myself going to work.

“I didn’t really think I could be a computer science professor because I didn’t have a PhD. My boss doesn’t have a PhD either, she has a background like mine, so she was okay with that,” he said. “They understood that, given my circumstances of 20 years business experience and a master’s degree, really will suit them well for what they want.”

The school year, and Jeff’s contract, came to an end a few weeks ago. But that isn’t where this story ends. Once his term ended, the permanent replacement position was posted and this time around, Jeff jumped on the opportunity without hesitation.

Naturally, he got the job!

“It is a very fulfilling career. Not only was it sort of my ideal career for a long time, which Curtis’ analysis confirmed, it suits me very well. It is a job where everyday when I get up and I go there, I don’t consider myself going to work. Even though I had started my own companies, they were still all just jobs,” Jeff said. “There is a huge level of reward to help students gain an understanding of a discipline I first learned 30 years ago. Just because of the careful analysis we did about what would make me happy in a job, I got the job everyone wants, where I go in everyday and think, I am so lucky, I get to do this.”

Thinking back on it now, I can’t believe I pulled that off and I couldn’t have done it without Curtis.

While it was evident that he was a shoe-in for the position, another candidate was also in the running for the permanent position. It was the reviews from Jeff’s students that really gave him the edge.

“They asked my students, ‘Should we hire this guy?’ and some of them literally said, ‘What, are you crazy? Of course you should hire this guy!’ He laughed. “That gave me the edge over the other guy who was half my age and had a PhD in computer science. Thinking back on it now, I can’t believe I pulled that off and I couldn’t have done it without Curtis.”

He said that Curtis’ five-step process really made sense to his analytical mind and worked well, because in areas that he found overwhelming or even terrifying, like requesting an interview, Curtis was able to help keep the momentum going.

“Because I was a process person, I respected that he had a process that gave you a sense of motion. Sometimes if you are just wondering how you are going figure out what to do, it seems like an overwhelming process. He took an overwhelming project, like figure out the future of your life, and he turned it into a set of steps that made sense. They had a pace and an outcome that we both needed to see,” Jeff said. “The whole process helps you focus on moving forward from where you are to where you want to be and that’s what I liked about it. In my case, it really did make a fundamental difference in my life, it changed my day-to-day activities. It is much more in-tune with my natural interest and abilities.”

Career Journey – From IT to Health and Wellness