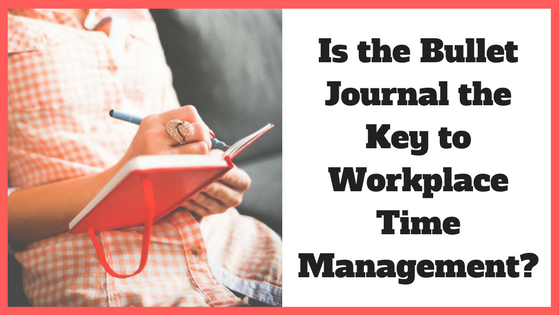 Is the Bullet Journal the Key to Workplace Time Management?

Whenever a new craze sweeps our offline and online worlds, it’s difficult not to get caught up in it (here’s looking at you, Mr “But I’m doing it ironically!”) But sooner or later the craze passes and we’re all left wondering why we ever thought it was a good idea to film ourselves swallowing a spoonful of cinnamon.

Currently top of the craze-charts is the Bullet Journal. For those unfamiliar with the Bullet Journal, it does exactly what it says on the tin, being a journal in which you write in bullet-point form. (For a more helpful guide, click here). But it’s also a rare example of a fad which, when brought into the workplace, could actually help you out professionally.

At its core, the Bullet Journal is a souped-up version of the humble to-do list. And as a productivity tool, said to-do list is pretty hard to beat.

A psychological phenomenon called the Zeigarnik Effect means that, while humans quickly forget completed tasks, we’re wired to fixate on the things we’ve left unfinished. And this fixation is so prevalent that it stops up from focusing properly on other work.

BUT, if we plan out how we’re going to complete those unfinished tasks, all our worry about them magically melts from our brain, and our performance on the task-at-hand skyrockets.

The whole point of productivity-enhancing lists is lost if making said list significantly eats into your work time. When you’re busy, speed matters. Which is why the Bullet Journal’s stated aim of enabling “rapid logging” is so useful.

Essentially, you just scribble down a quick list of tasks to do that day, events you need to remember, ideas that pop into your head, whatever. But – and here’s the clever part – you then organize that list with a bunch of symbols written by each item.

Bullet points denote a task to do. Done it? Turn the bullet points into an “x”. Want to put it off for another day? Make it a “>”. Events are denoted by “o” and thoughts by “-“. You can also indicate that a task is particularly important (“Ø”), inspirational (“!”), or needs further exploring (“”).

How many times have you had an idea of pure brilliance, only to forget it five minutes later?

Keeping a Bullet Journal on hand gives you an easy way to record these thoughts as they occur to you (using the symbol system above) without having to significantly interrupt your workflow. Then, you can return to and develop them at your leisure.

The second advantage of this system? Having everything in one place. Instead of scrabbling around for that loose piece of paper you wrote your notes on, you can flick through one notebook, comparing multiple ideas and picking out the best.

It differentiates between short-term and long-term tasks

Most of us will have work projects that can only be completed over a significant period of time. But writing a month-long task on a daily to-do list seems kind of pointless, as there’s no way you’ll be able to cross it off. At the same time, you’ll need to spend a significant portion of your time on it.

The Bullet Journal solves this by separating lists into daily, monthly and yearly sections. Big projects get filed under the monthly/yearly task list, allowing you to see at a glance how much work you’re taking on and preventing you from overloading yourself. Under the daily list, you put small, specific mini-tasks that are helping you towards the ultimate goal.

Incidentally, this approach of breaking big tasks down into actionable steps is widely revered as way to keep yourself motivated and on track.

Want to further maximize your time and hone in on your leadership skills? Check out our directory of career coaches and get matched up with a coach that can help you become the best version of yourself.

About the Author Beth Leslie

Beth Leslie writes graduate careers advice for Inspiring Interns, who specialize in matching candidates to their dream internship. Check out their graduate jobs" listings for roles.

Want to Make a Career Change? Consider These Points First

Turn Your Internship Into a Full-Time Job