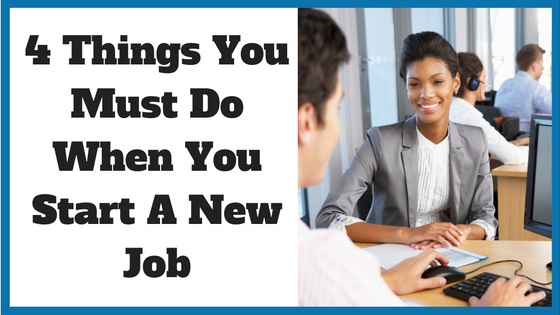 4 Things You Must Do When You Start A New Job

Reputations start out fluid but get fixed pretty quickly and once that happens, shifting it becomes ever more difficult. Now, that’s good news if you’ve got a good reputation as then you can start looking for signs that you should get promoted early on. If, on the other hand, you’ve gone and given yourself a bad one – well that can significantly worsen your future at the company you’re working at.

For that reason, particularly when you’re just starting out you’ve got to make sure you do a number of things correctly. What kind of things am I talking about? Well, here are four things that will definitely help your reputation along.

Show up early and leave late

Nothing shows eagerness quite as well as being there before your boss arrives and leaving only after they do. Keep that up for a couple of weeks and people will notice.

You might be tempted to yell when you arrived this morning from the rooftops. Don’t do that. If you do that, then people will assume that the entire reason that you arrived as early as you did is to impress people. And that will do quite the opposite. So, don’t ask people when they arrived only so that you can tell them when you did.

I actually like to get in early all the time as it gives you an hour or so to get a lot of work out of the way while everybody else is still kind of just wandering around waiting for their brains to start functioning. That hour can mean that instead of running after every task, trying to put out fires, you’re on top of things.

You might find that you end up doing the same. At the same time, that’s not the point. You don’t have to do it forever. You just have to do it the first few weeks.

Asking the right questions can make you look smart. The problem, of course, is what are the right questions? The trick, I’ve found, is in the beginning to ask all the questions. Then you’ll get credit for the good questions, while you’ll be forgiven the bad questions because you’re new and you don’t yet know how things work.

This luxury won’t be available to you as much later on, so really make sure you get all your questions later on. You won’t just make sure you look smart, but you’ll also know the ins and outs of the place you work while it’s still possible.

After all, there’s nothing worse than assuming you know how something works only to find out after several months you’ve been doing it all wrong.

Find out the unwritten rules

Sure, every place of work will have a bunch of written rules that you’re supposed to obey, like not engaging in resume making in the office. But the rules hardly end there. There are frequently tons of unwritten rules that you’ve got to follow as well (here are some good examples). Often, the people that work there are barely even aware of these rules – until you break on of them, that is.

These rules might include when you take lunch, what clothes you wear, when you can approach somebody to ask questions and things like that.

How do you discover these rules? Mainly by watching how other people behave. If everybody has a particular way of dressing, or everybody avoids a certain space, or everybody gathers in the coffee corner at the same time, then you might very well be watching one of the unwritten rules in action. In these cases, it’s probably best to follow the rest.

If tasks need to get done, offer to do them. Yes, that’s brown nosing. Yes, the more cynical people in your company might think worse of you as a result. But your boss won’t and ultimately they have more influence than any of the other people do.

And you really want to keep in their good books if you can.

Don’t just offer to do jobs for your boss, either. When other people in the company need help with something that you think you might be able to help out with, then get involved. This will give you a look into another area of the company, as well as get you brownie points with somebody that you can later use when a task is overwhelming or you need something explained.

Plus you might end up making friends. And friendship is almost always to your benefit!

There are more things that you can do to make a good initial impression. Basically, it amounts to being proactive, getting involved and avoiding the cynical group (you know, the complainers and the unhappy folk), as hanging out with them will immediately lead to you being tarred with the same brush.

Also, watch the people around you as their attitudes, their views and their perception of what is going on are formed by far more experience than yourself. In that way, you can get a pretty decent idea of how the corporate culture works as well as what to watch out for.

And that can be a life saver somewhere down the road.

About the Author Michael Harred

Michael Harred is a writer, who contributes to the national Florida Review and the university magazine Cypress Dome. To find more about Michael – check his Twitter and Facebook.